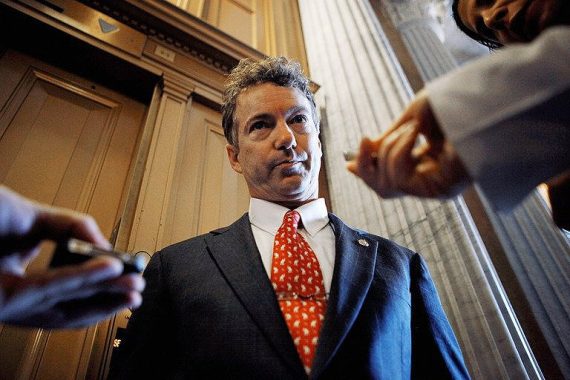 It’s a probably quixotic effort, but Kentucky’s Rand Paul is standing largely alone in arguing that Congress should actually debate the PATRIOT Act before voting to renew it yet again:

Sen. Rand Paul has single-handedly stopped the extension of three key provisions of the Patriot Act until after they expire at midnight Thursday. Unless he folds.

The Senate voted to end debate on the measure, but Sen. Paul, a Kentucky Republican, is insisting the Senate debate the measure for a full 30 hours, which would extend beyond the midnight expiration. Mr. Paul’s tactic is procedural: By not agreeing to a request for unanimous consent to yield back debate time, he can insist the debate continues until 7a.m. Friday, past the midnight expiration of the provisions. Mr. Paul, a libertarian who opposes the Patriot Act, could change course and allow a vote before the provisions expire.

Senior lawmakers of both parties have urged the passage of the expiring provisions before the deadline, as have top figures in the U.S. intelligence community. The Director of National Intelligence James R. Clapper said in a letter to Senate leaders there could be serious repercussions for law enforcement’s ability to continue its surveillance efforts if the measures expire.

Senate Majority Leader Mitch McConnell, Mr. Paul’s fellow Kentucky Republican,  also expressed dismay at the delay in a Senate floor speech Thursday morning, saying that it is “absolutely imperative” that the Patriot Act provisions are renewed.  “Nothing in this extension has ever been found to be unconstitutional,” he said. “And most of these authorities haven’t even been challenged in court — ever.”

Of course, they haven’t really been debated in Congress either, and when the act was initially passed in 2001 it was rushed through Congress so quickly that nobody had a chance to actually read the final bill, which may be acceptable for an omnibus spending bill but is wholly unacceptable for a bill that touches on fundamental constitutional rights.

Paul’s dispute centers on his desire to put before the Senate a series of amendments and what he says are agreements he had with Harry Reid and Mitch McConnell which both have reneged on, part of which Paul discussed on the floor Monday:

And, then yesterday, he responded to a charge that he wanted terrorists to have weapons because he is opposed to the Act’s provisions for warrantless weapons searches:

Paul is fighting the good fight here, and he’s been joined in some part by Senators such as Jim DeMint and even Democrats by Ron Wyden. However, we all know what’s going to happen here. The votes will be held and the law will be renewed, the only question is when.

One reporter on MSNBC this morning said that some Senators and Congressman were frustrated with Paul’s insistence on debate because they wanted to get out of town for the long Memorial Day weekend. That comment alone should demonstrate just how pathetic our institutions of government have become when debate on an important piece of legislation is viewed as inconvenience by men and women who’d rather go to the town Weenie Roast than do their jobs.

Moreover, despite the panic from the law enforcement community, the White House, and Congressional leadership, letting these provisions of the Act lapse so they can be debated on would not create a major crisis:

In the event that consensus has not been achieved when the new deadline arrives, there is little reason to believe their expiration would cause any near-term impediment to intelligence gathering: all three sunsetting provisions have been used fairly sparingly, and are, in any event, subject to a grandfather clause that would permit their continued use for investigations already underway.

So what’s the harm in allowing a full debate on this law? I don’t see one.