Rise of the Warrior Cop

The paramilitarization of American law enforcement has had deadly consequences. 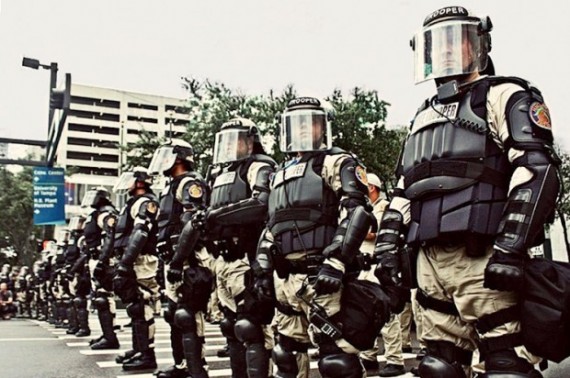 The paramilitarization of American law enforcement has had deadly consequences.

Salon (“Why did you shoot me? I was reading a book”: The new warrior cop is out of control):

Sal Culosi is dead because he bet on a football game — but it wasn’t a bookie or a loan shark who killed him. His local government killed him, ostensibly to protect him from his gambling habit.

Several months earlier at a local bar, Fairfax County, Virginia, detective David Baucum overheard the thirty-eight-year-old optometrist and some friends wagering on a college football game. “To Sal, betting a few bills on the Redskins was a stress reliever, done among friends,” a friend of Culosi’s told me shortly after his death. “None of us single, successful professionals ever thought that betting fifty bucks or so on the Virginia-Virginia Tech football game was a crime worthy of investigation.” Baucum apparently did. After overhearing the men wagering, Baucum befriended Culosi as a cover to begin investigating him. During the next several months, he talked Culosi into raising the stakes of what Culosi thought were just more fun wagers between friends to make watching sports more interesting. Eventually Culosi and Baucum bet more than $2,000 in a single day. Under Virginia law, that was enough for police to charge Culosi with running a gambling operation. And that’s when they brought in the SWAT team.

On the night of January 24, 2006, Baucum called Culosi and arranged a time to drop by to collect his winnings. When Culosi, barefoot and clad in a T-shirt and jeans, stepped out of his house to meet the man he thought was a friend, the SWAT team began to move in. Seconds later, Det. Deval Bullock, who had been on duty since 4:00 AM and hadn’t slept in seventeen hours, fired a bullet that pierced Culosi’s heart.

Sal Culosi’s last words were to Baucum, the cop he thought was a friend: “Dude, what are you doing?”

In March 2006, just two months after its ridiculous gambling investigation resulted in the death of an unarmed man, the Fairfax County Police Department issued a press release warning residents not to participate in office betting pools tied to the NCAA men’s basketball tournament. The title: “Illegal Gambling Not Worth the Risk.” Given the proximity to Culosi’s death, residents could be forgiven for thinking the police department believed wagering on sports was a crime punishable by execution.

That’s an excerpt of an excerpt from Radley Balko’s new book Rise of the Warrior Cop: The Militarization of America’s Police Forces.