The Humane Society of the United States has a blog, detailing the efforts of these selfless people who are rescuing dolphins and breaking up dog fights in the tsunami flood zone.

I sent a text message to Jim Styers from Myanmar Dolphin Project to let him know the adult dolphin had been caught. He wanted to know if anyone had taken any statistics? was the animal rehydrated, did it get antibiotics, etc? I told him I didn’t know, but thought probably not since the rescue was conducted by local fishermen who would not have had the resources. Jim suggested that someone should be checking the beach regularly as stressed or tired dolphins will beach themselves. That made me think of what Miranda said: that it was easy to catch the animal because she seemed tired. I hope this is a victory.

Edwin Wiek from SOS Wildlife Rescue Center went to the site immediately when he heard the news, and stayed until dark surveying from the shore to see if the other dolphin surfaces.

I spotted a HSUS blogad earlier today, soliciting donations for the relief effort.

The Humane Society of the United States is not the US Humane Society. They are not the people who rescue homeless strays and volunteer at animal shelters. In fact, HSUS doesn’t run any shelters at all.

Worth magazine rates HSUS among the worst-managed U.S. charities, noting that HSUS took in over $65 million in 2000, yet spent more than half of it to raise additional money. “We’re not saying they’re crooked,” offered Worth writer Reshma Memom Yaqub in November 2002, “but we do take issue with some business practices.”

Don’t give them a cent.

Humane Society Of The United States: Under Investigation 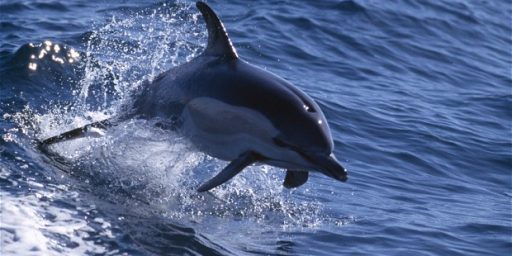