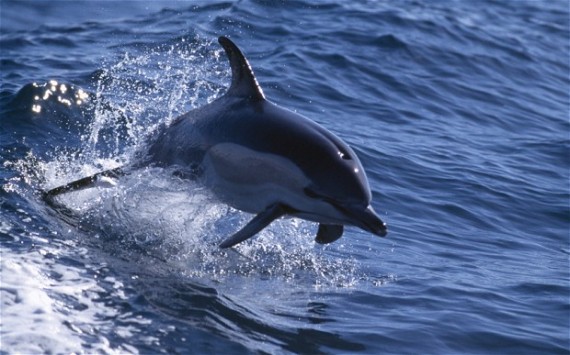 Marking the latest development coming from the Ukraine’s loss of Crimea to Russia, the nation’s team of militarized dolphins is now under Russian control:

But of all the Ukrainian military assets Russia has seized during the annexation, none is quite as unusual as the combat dolphin program.

The Soviet Union began training dolphins and other marine mammals to locate mines, mark underwater and obstacles and detect – and if necessary kill – enemy frogmen in the 1960s.

The program is shrouded in myth, but the mammals are believed to have been trained to kill frogmen with special harpoons or knives fitted to their backs, or drag them to the surface to be captured.

They were also reported to be fitted with packets of explosives and trained to carry out suicide attacks against enemy vessels, using their natural sonar to distinguish Soviet submarines from potential targets.

With the collapse of the Soviet Union in 1991, Ukraine inherited both the animals and the experts who trained them.

With fewer geopolitical foes to worry about, the dolphins found a new role providing therapy swimming for disabled children.

Ukraine relaunched the military program in 2012, and the current generation of dolphins at the centre are already proficient at marking lost weapons and underwater obstacles with buoys.

But in February this year the defence ministry in Kiev announced plans to release the dolphins into the wild or rehouse them in civilian aquariums in a cost cutting move.

Now the base is hoping for a new lease of life under a better funded Russian navy.

“Our experts have developed new devices, which convert the detection of objects by the dolphins’ underwater sonar to a signal on an operator’s monitor,” an employee told Russia’s RIA Novosti news agency on Wednesday.

“But the Ukrainian Navy lacked the funds for such know-how, and some projects had to be shuttered.”

The next stage is to train them to kill enemy frogmen with knives or guns mounted on their heads, the employee told RIA Novosti.