Saddam Hussein's closest adviser in the 1990s, Tariq Aziz, is talking to reporters, and he wants American troops to stay in Iraq. 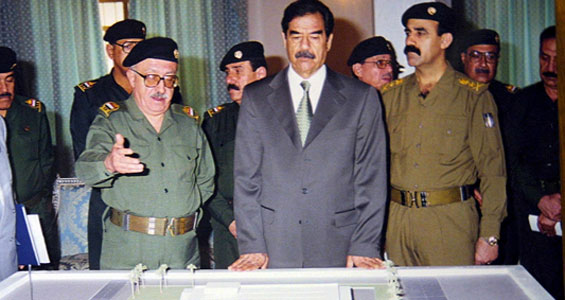 Throughout the 1990s, Tariq Aziz was the public face of Saddam Hussein’s regime to the western world. When the Iraq War came in 2003 and Hussein went into hiding, it was Aziz who negotiated the surrender of Iraq to American forces. Now, still in prison, he is starting to talk:

Saddam Hussein’s most loyal deputy, Tariq Aziz, has accused Barack Obama of ‘leaving Iraq to the wolves’ by pressing ahead with a withdrawal of combat troops in the face of festering instability and a surge in violence.

In his first interview since he was captured shortly after the fall of Baghdad more than seven years ago, Iraq’s former deputy prime minister and long-time face to the world said the United States would cause the death of Iraq if it continued to withdraw its combat forces.

“We are all victims of America and Britain,” he told the Guardian from his prison cell in Baghdad. “They killed our country in many ways. When you make a mistake you need to correct a mistake, not leave Iraq to its death.”

Speaking only days after Obama confirmed that the US would be ending its combat mission in Iraq this month with the withdrawal of thousands of troops, Aziz said the country was in a worse state than before the war.

“For 30 years Saddam built Iraq and now it is destroyed. There are more sick than before, more hungry. The people don’t have services. People are being killed every day in the tens, if not hundreds. “I was encouraged when [Obama] was elected president, because I thought he was going to correct some of the mistakes of Bush. But Obama is a hypocrite. He is leaving Iraq to the wolves.”

Of course, the United States isn’t really leaving Iraq entirely. Even after 2011, there will be something approaching 50,000 Americans stationed in the country, and that doesn’t include private contractors that will be in Iraq for year to come. Nonetheless, it is pretty amusing to hear the Saddam Hussein’s closest adviser calling for American troops to stay in his country.

Aziz also defended himself from charges that he didn’t do enough to stop Hussein during his years in power:

“Of course I was a member of the Revolutionary Command Council, a leader of the Ba’ath party, deputy prime minister, foreign minister – all of those posts were mine,” he says inside the Iraqi prison that he now calls home. Aziz had just returned from another court hearing inside Baghdad’s green zone, where the ghosts of Iraq under Saddam are being exorcised in a series of painstaking trials.

However, he claims that he was powerless to stymie the will of the leader he served, and that none of the blood on the regime’s hands was also on his.

“All decisions were taken by president Saddam Hussein. I held a political position, I did not participate in any of the crimes that were raised against me personally. Out of hundreds of complaints, nobody has mentioned me in person.”

“I asked Saddam Hussein not to invade Kuwait,” he said. “But I had to support the decision of the majority. When the decision was taken, I said to him this is going to lead to war with the US, and it is not in our interests to wage war against the US.”[

Not to excuse Aziz here, but he’s probably right. Iraq under Saddam wasn’t the United States, he couldn’t just resign in protest over a policy dispute. If he did, it’s likely he and his family would’ve been killed.

Aziz also repeated Saddam’s claims during his trial that Iraq’s WMD program in the years before the 2003 war was, in fact, a vast deception aimed at Iran:

When asked why Saddam kept the US guessing about his weapons programme, he confirmed the dictator’s account to his captors that he had been playing to Iran, not to the west. “Partially, it was about Iran [the deterrent factor],” Aziz said. “They had waged war on us for eight years so we Iraqis had a right to deter them. Saddam was a proud man. He had to defend the dignity of Iraq. He had to show that he was not wrong, or weak.

“Iran was our biggest enemy. We had to defy them whatever the cost. Now Iran is building a weapons programme. Everybody knows it and nobody is doing anything. Why?”

Pressed on whether pride over wisdom had been a main factor in his country’s destruction, Aziz replied: “We are Arabs, we are Arab nationalist. We must be proud.”

I’ve always thought there was a certainly level of plausibility to this story.

The Iran-Iraq War, which, of course, Saddam started, was as devastating to the Iraqi economy as the much-shorter Persian Gulf War would be only a few years later. and Iran remained a threat to Iraq throughout the 90s. The idea that Saddam would want to keep Iran, and the U.S, off-balance by letting them think he had a secret WMD program is, quite honestly, far easier to believe than the idea that there was a secret program that we haven’t been able to find any evidence of despite ten years of looking. Of course, if this is true, it would mean that Saddam miscalculated himself into a war that ended up destroyed his regime and, eventually, himself, but it wouldn’t be the first time in history that something like that had happened.

Aziz says that he’d be willing to speak out more about his years at Saddam’s side after he is released from prison, which seems a likelihood at some point given that Iyad Allawi, the leading candidate for Iraq’s prime minister, seems to be inclined to release him at some point. Aziz hints that, if that happens, we’ll have more to hear about what it was like to be Saddam Hussein’s closest adviser.