As the date for Catalonia's disputed independence referendum nears, tensions are rising between Madrid and Barcelona. 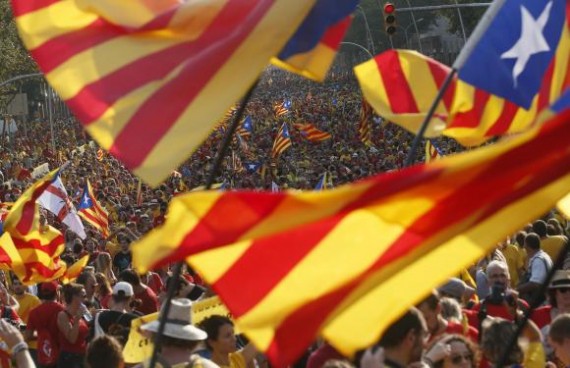 Catalonia’s non-binding independence referendum, which has been declared illegal by Spain’s Constitutional Court, is just over a week away and tensions are building between Madrid and Barcelona:

MADRID — The Spanish police detained more than a dozen people in the region of Catalonia on Wednesday, drastically escalating tensions between the national government and Catalan separatists. The episode occurred less than two weeks before a highly contentious referendum on independence that the government in Madrid has vowed to block.

With the backing of the constitutional court, Prime Minister Mariano Rajoy has been stepping up efforts to prevent the referendum, scheduled for Oct. 1.

The police raided the offices of the Catalan regional government early Wednesday and arrested at least 14 people, including Josep Maria Jové, secretary general of economic affairs. The arrests were not expected, but hundreds of mayors and other officials in Catalonia had been warned that they would be indicted if they helped organize a referendum in violation of Spanish law.

Hundreds of supporters of Catalan independence immediately took to the streets of Barcelona to protest the arrests. Jordi Sanchez, the leader of one of the region’s biggest separatist associations, used Twitter to urge Catalans to “resist peacefully,” but also to “come out and defend our institutions.”

Speaking before the national Parliament, Mr. Rajoy defended the detentions and accused separatist politicians of promoting civil disobedience and escalating the conflict, using methods he described as “profoundly antidemocratic.”

By passing a law allowing for the Catalan referendum, Mr. Rajoy said, the separatists had flouted Spanish law and “invented a new legal order.”

“Luckily,” he added, “the rule of law has functioned.”

Separatist leaders, however, have accused Mr. Rajoy of plunging Catalonia into a state of emergency rather than negotiating the terms of a referendum.

“The issue that is at stake today isn’t the independence — or not — of Catalonia,” Raül Romeva, Catalonia’s foreign affairs chief, told a group of foreign correspondents in Madrid on Wednesday, “but democracy in Spain and the European Union.”

Mr. Romeva said that Catalonia would hold the referendum as planned, and that Catalan lawmakers would act to honor the result within 48 hours — meaning they would declare independence unilaterally if people voted for it.

Madrid seized control of Catalonia’s finances this week, seeking to ensure that separatist politicians could not spend further public funds on the referendum. Under the guidance of public prosecutors and Spanish judges, the police conducted raids across Catalonia to confiscate ballots and campaign materials from printing shops and delivery companies. Spain’s judiciary has also taken measures to stop advertisements related to the referendum in the news media.

Still, the Catalan government says it can hold the vote, and recently announced that it had stored about 6,000 ballot boxes in a secret location.

“The referendum will be held and is already organized,” Mr. Romeva said. “Clearly the conditions in which it will be celebrated are not those that we wished for.”

As I’ve said before, there are several possible outcomes to the October 1st referendum. One, of course, is that Madrid is successful in stopping it from happening at all, but it’s difficult to see how that wouldn’t serve but to cause tensions to rise. Whether it involves the use of force of some kind or legal means, the prospect of the national government preventing people from voting at all seems as though it would only empower the pro-independence side of the argument. If the referendum does go forward, there are a number of possible outcomes all of which seem guaranteed to make the situation going forward quite complicated. The first possibility is that there is heavy turnout on October 1st and a strong majority in favor of independence. In that case, Catalan leaders will feel emboldened to push for something that doesn’t seem to be allowed under the Spanish under the Constitution and which Madrid has vowed to resist. Whether and how they could deliver on their promise is hard to see, and if they fail to do so it could mean the end of their own fragile grip on power in the region. If turnout is low or the margin in favor of independence is a small one, that would likely be seen as a defeat for pro-independence forces but which may still lead them to push forward notwithstanding the fact that they wouldn’t have the kind of strong popular support they are hoping for. Finally, of course, there’s the possibility that a majority of Catalans will vote against independence. In that case, then the pro-independence government in Barcelona would be left in a precarious position and Madrid would likely be emboldened to take the legal steps necessary to remove them from power.

At this point, it’s difficult to see how the crisis isn’t likely to get more serious over the coming ten days because neither side seems inclined to back down. On the Spanish side, Prime Minister Rajoy is already in a difficult if not impossible position that is only likely to get worse as October 1st gets closer. As the leader of a minority government, he’s in a precarious political position that would only get weaker if he’s seen as backing down in the standoff with Barcelona, and his power is likely to be undermined if the Catalan government goes forward with the referendum. At the same time, though, taking stronger measures to prevent the referendum will only serve to embolden the pro-independence forces and make an adverse outcome from Madrid’s point of view more likely.  For the politicians in Barcelona, the incentives are quite similar. Backing down at this point would most likely lead to them losing power and influence, as well as leading to a significant setback for the independence movement that they’re leading. At the same time, though, even a victorious outcome for their cause in the referendum would likely only be the beginning of new headaches. The Spanish Constitution apparently doesn’t allow for secession at all and it’s difficult to see how they could bring that into reality if Madrid truly resists even if the referendum is in favor of independence. For these reasons and more, the respective parties appear to be on a collision course and the people of Catalonia, and of all of Spain, are stuck in the middle.