The U.S. Air Campaign Against ISIS Is Much Bigger Than You Think

The Lexington Institute’s Daniel Goure explains, “The U.S. Air Campaign Against ISIS Is Much Bigger Than You Think.” The key ‘graphs:

What goes underreported and, hence, underappreciated, is the magnitude of the overall air operation being conducted in support of or in addition to the actual air strikes against targets on the ground. Simply put, behind every successful air strike is a massive supporting infrastructure of aircraft, ground operations and planning activities. Air strikes are not conducted in isolation. Every strike package consists not only of bomb-carrying aircraft but others providing the protection, electronic warfare support, aerial refueling, battle space management and intelligence. The 240 strikes in Iraq and Syria were supported by some 3,800 aircraft sorties, 1,700 tanker flights and over 700 ISR sorties. There have also been thousands of flights by transport aircraft, C-17s and C-130s making up the largest fraction, providing humanitarian relief but also moving personnel and essential supplies into the region.

Behind all these aircraft stands the supporting personnel and infrastructure necessary to any air operation. These range from ground crews and air traffic controllers to maintainers, armorers and intel personnel. Then there are the people in the air operations center who put together the air tasking order that details all the air activities for a 24-hour period. There are more people and more complexity when it is a joint and coalition operation.

Doing the math, this means there have been around 20 supporting sorties for each strike conducted. This is in a fairly benign environment. Even the use of the F-22 stealth fighter in Syria was based largely on taking advantage of its extraordinarily capable sensor suite and not its defense-avoidance capabilities. If this had been what air strategists call a contested environment, the number of supporting sorties would have been much higher. Against a serious adversary with advanced air defenses, there would likely be a protracted effort to roll back the defenses that would require specialized platforms and weapons intended for the mission of suppressing enemy air defenses.

For more than two decades now, we’ve been using air power so routinely, almost exclusively in uncontested air space, that we lose sight of the enormity of the operations. The Libya campaign, which was sold as a mere supporting operation for the United States, was actually enormously complex and large. To the extent our foes have serious air defenses at all, we easily take them out in the initial hours of the campaign. After that, it’s largely shooting fish in a barrel.

Our pilots and crews are still in mortal danger, of course, but really no more so than they are in training. Flying—and military maneuvers generally—are inherently dangerous. But the “no ground troops” policy is so seductive precisely because we’re not going to take heavy casualties from the air. 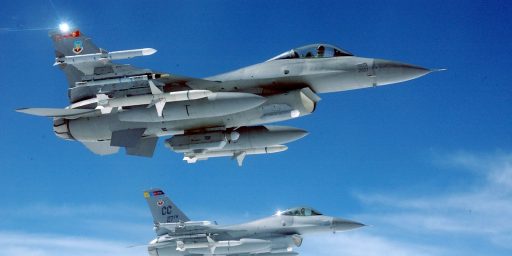