The States and the Framers (Again)

Madison argued that the people were the ultimate authority.

It is often alleged in conversations about federalism (and especially ones that revolve around the 17th Amendment) that state’s have unique qualities that lend themselves to being represented in a way that is somehow different from representing the people in said states.  Further, the argument is sometimes proffered that this is what the Framers intended.

Assertions about state sovereignty apart from the populations of said states miss a couple of rather key points.

1)  We had a government wherein all the states were truly sovereign, co-equal entities as this was what we had under the Articles of Confederation.  It failed.

2)  The entire purpose of the Philadelphia convention was to subordinate the states to the central government.  This is a fact that utterly impossible to deny or refute.  Yes, one can argue over the extent of said subordination, but one has to first acknowledge that subordination was the goal.  Again:  s system of co-equal, sovereign states had been tried and it did not work.

3)  As I noted in a recent post, James Madison went to Philadelphia hoping to severely undercut the power of the states—although he did not achieve all of those goals.

4)  The reason we emerged from Philadelphia with federalism (a system with both a strong central government but also with strong states) is because it was necessary to find a political compromise that would allow the states to give up a great deal of power while still not giving up all of it.  Federalism was born of political compromise, not grand design and certainly not from an imperative to treat the states like sovereign entities in the way meant by revisionist interpretations of the 17th Amendment .  On that latter point we have to return to item #1 of this list:  we had such a system and its failure led to its rejection.

Now, recognizing the caveats I noted in the above linked post about quoting the Framers/Founders, let me quote James Madison from Federalist 46 on the question of whether the states are to be considered units apart from the people who populate them:

The federal and State governments are in fact but different agents and trustees of the people, constituted with different powers, and designed for different purposes.

Note we have here Madison’s basic approach to what he called republican government:  the delegation by the people via the vote to the government to act as agents of said people.  Further, the notion of accountability via regular election is central to that model (see, for example, Federalist 39 on this topic).  Madison assumed that the agents of the people would serve for set amounts of time at the pleasure of the people (i.e., that at regular intervals they would have to seek re-election).

More important to the topic of the post it should be noted that Madison does not here consider the states to be unique entities in and of themselves.  In other words, he does not delineate a theory of the constitution as representing the states on the one hand and the people on the other.*  Rather, he sees them as being agents of the people just like the central government, just with different responsibilities (i.e., federalism).

The basic relationship can be detailed as follows: 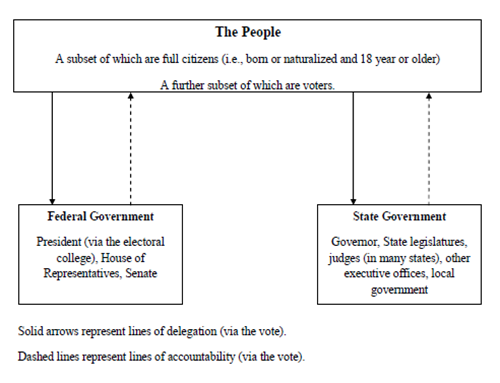 Such a model does not envision states are having their own interests apart from the people living in them.

Interestingly, Madison went on from the quote above to state

The adversaries of the Constitution seem to have lost sight of the people altogether in their reasonings on this subject; and to have viewed these different establishments, not only as mutual rivals and enemies, but as uncontrolled by any common superior in their efforts to usurp the authorities of each other. These gentlemen must here be reminded of their error. They must be told that the ultimate authority, wherever the derivative may be found, resides in the people alone…

Interestingly, the opponents of the 17th Amendment make the same error that the anti-Federalists did:  they look to the states as the ultimate authority in some cases, instead of looking to the people.**

None of this is to say that the states were considered unimportant (indeed, quite the contrary).  However, the issue is whether the states can be construed as having their own, unique interests as states.  They do not because the only thing that animates them as political entities in the first place are the people who reside within them.

**Indeed, it is remarkable the degree to which many alleged defenders of the US Constitution in the current era sound like anti-Federalists.  While they are certainly free to hold said views, it should be understood (lest it is not obvious) that the anti-Federalists opposed the ratification of the Constitution.

Eliminate Midterm Elections? Only If You Want To Make Congress Even Less Representative