TiVo Will No Longer Skip Past Advertisers (LA Times)

When it debuted in 1999, TiVo revolutionized the TV experience by wresting control of screen time from advertisers, allowing viewers to record shows and skip commercials. TiVo’s slogan said it all: “TV your way.” Behind the scenes, though, TiVo was courting advertisers, selling inroads to a universe most customers saw as commercial-free. The result is a groundbreaking new business strategy, developed with more than 30 of the nation’s largest advertisers, that in key ways circumvents the very technology that made TiVo famous.

By March, TiVo viewers will see “billboards,” or small logos, popping up over TV commercials as they fast-forward through them, offering contest entries, giveaways or links to other ads. If a viewer “opts in” to the ad, their contact information will be downloaded to that advertiser Ã¢€” exclusively and by permission only Ã¢€” so even more direct marketing can take place. By late 2005, TiVo expects to roll out “couch commerce,” a system that enables viewers to purchase products and participate in surveys using their remote controls.

Perhaps even more significant is TiVo’s new role in market research. As viewers watch, TiVo records their collective habits Ã¢€” second by second Ã¢€” and sells that information to advertisers and networks. (It was TiVo that quantified the effect of Janet Jackson’s Super Bowl “wardrobe malfunction,” reporting a 180% increase in the number of replays reported by viewers.) For advertisers it’s an extraordinary boon, a quicker and more effective way than they’ve ever had of measuring the effects of their TV commercials. For viewers, TiVo’s new strategy means the technology famously christened “God’s machine” by Federal Communications Commission Chairman Michael K. Powell is rapidly becoming a marketer’s best friend, proving that try as they might, consumers cannot hide from marketing. “TiVo looked like it was going to be the weapon of mass destruction of Madison Avenue,” says Robert Thompson, Syracuse University professor of television and pop culture. “However, we knew that the [TV] spot ad would not go gently into the night, and this is the next battle strategy.”

[F]rom its inception, TiVo engineered its system with advertisers and networks in mind. While competitor ReplayTV had allowed its subscribers to skip commercials entirely Ã¢€” TiVo restricted its fast-forward capabilities so viewers could still see the commercial, albeit eight times faster than intended. (ReplayTV last year was forced by litigious studios and networks to adopt a more TiVo-like system.) TiVo also sold space on its main menu to advertisers as a venue for commercials that ran longer than the usual 30- or 60-second spots. And the company developed “tagging” technology as a way for networks to advertise TV shows by embedding a green thumbs-up sign in the corner of the screen during a show’s promo, reminding the viewer to record it. Advertisers saw tagging as an opportunity and jumped at it.

By 2002, TiVo was selling “tag” time to Lexus and Best Buy. The thumbs-up icons appeared during live commercials, inviting the viewer to “click here” for a chance to enter a contest, receive a DVD or brochure or watch a glossy, long-form commercial. Over time, General Motors, Nissan Motor Co., Coca-Cola Co., Walt Disney World and Royal Caribbean International cruise line paid their way into the program. And all the while, TiVo recorded viewer response. The tags proved so lucrative for TiVo, and so popular with viewers, that the Alviso, Calif.-based company expanded their capabilities significantly. They created “billboards,” more robust tags that are larger and promote greater brand awareness with logos and text.

Until now, the new technology has been relatively subtle and not widely seen; by spring, it will be hard for TiVo users to miss. (The technology is part of the software provided to all TiVo users.) “The message we really want to get across,” says Davina Kent, TiVo’s advertising and research sales manager, “is that we now have a dedicated road map for advertising.”

Via Steven Taylor, who is unconcerned by the impending change:

No doubt some will be upset by this move, but it doesnÃ¢€™t bother me, insofar as long as I can zip past the broadcast commercials and am not forced to view the Ã¢€œbillboardÃ¢€ save when I am fast-forwarding, whatÃ¢€™t the big deal? Indeed, since this will contribute to the health and long life of TiVo, I am all for it.

With respect to whether I see a fast-motion ad versus a tag for the ad when I’m fast forwarding, I agree. I am, however, somewhat concerned about privacy issues. I, for one, didn’t understand that TiVo was collecting information on my viewing habits and passing it on to advertisers. So long as the advertisers don’t also get information on my identity to match with that information, I suppose it’s no great problem. Still, it strikes me as a misuse of the information that I provide to TiVo solely for the purpose of recording the shows that I’m paying them to record for me. 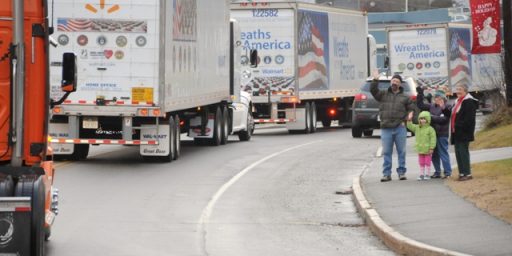