The DOD says Walmart was violating its trademarks. 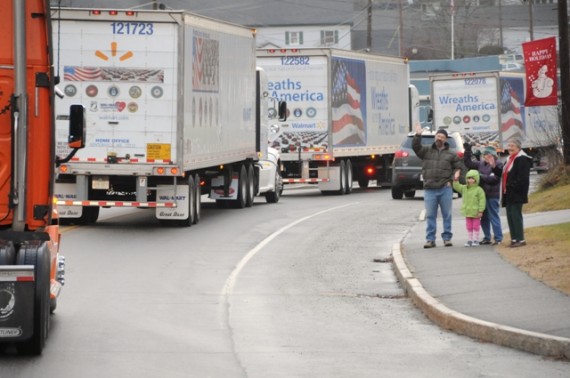 Photo by Joseph A. Lee

The Pentagon tells Walmart to stop using military seals on its Wreaths Across America trucks.

Stars and Stripes (“DOD asks Walmart to lose logos from trucks used for Wreaths Across America“):

The U.S. Department of Defense has asked Walmart to remove military logos from 16 corporate tractor-trailers used to carry wreaths to veterans’ graves for Wreaths Across America.

The DOD says Walmart was violating its trademarks.

The trucks sport logos for the U.S. Army, Navy, Marines, Air Force and Coast Guard above a field of snowy, wreath-covered headstones.

Jessica O’Haver, program manager for the trademark licensing office of the Marine Corps, said at least four of the five logos are official seals intended for use only by the DOD. A Marine spotted one of the trucks, took a picture and alerted her office back in December.

Walmart says the logos will be down by Memorial Day.

“It was never our intention to create controversy; we only wanted to honor the brave men and women who fight or have fought for our country,” said Walmart spokeswoman Dianna Gee. “We use those trucks for specific, veteran-related events. We will be replacing the logo with the new design (for Wreaths Across America) in the near future.”

Gee said it doesn’t diminish Walmart’s commitment to the charity, and O’Haver indicated there were no hard feelings.

“Walmart is very, very pro-military and they support us a lot, and so we work with them a lot,” O’Haver said. “We certainly appreciate all that Wreaths Across America does to honor veterans and those who have fallen. It’s just we can’t appear to officially endorse the program with our logos.”

I was only vaguely aware of this program but this strikes me as a petty move by DoD. Beyond that, how can taxpayer-owned intellectual property be trademarked? Aside from classified materials, to which public access is naturally controlled (or, at least, attempted to be controlled), government-produced documents, photographs, and whatnot are instantly in the public domain. How can an agency seal be trademarked?

Obviously, the use of government seals for fraudulent purposes can and should be policed. But who is it that would see these trucks and think Walmart was an official government agency? And I’m finding photographs of these trucks dating at least as far back as 2010; surely, if this were a problem, someone would have noticed before now.

My sense that everything produced by the Federal Government is public domain was colored by my more-or-less correct understanding of copyright law. As noted in the article “Copyright and Other Rights Pertaining to U.S. Government Works” at USA.gov, which I’m reproducing in full below because I can,

It is not subject to copyright in the United States and there are no copyright restrictions on reproduction, derivative works, distribution, performance, or display of the work. Anyone may, without restriction under U.S. copyright laws:

There are exceptions, however: