The Foundation that holds the copyright on one of the most famous works about the Holocaust is seeking to extend their copyright in Europe by naming Otto Frank co-author of his daughter's published diary. 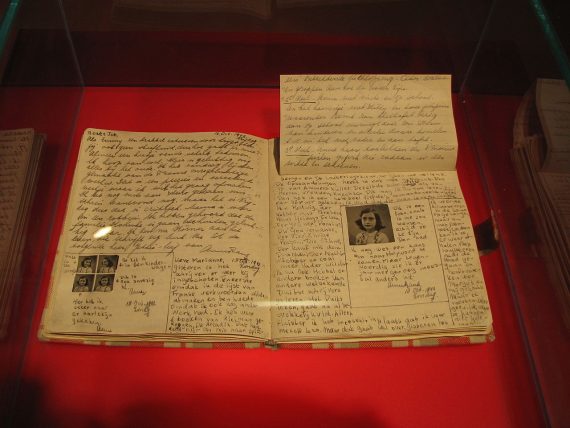 The foundation that holds the copyright to The Diary Of A Young Girl, which has become popularly known as “The Diary of Anne Frank,”  is now claiming that Frank’s father Otto qualifies at a co-author of what has become one of the most famous accounts of life for Jews in Europe during the Holocaust in what seems to mostly be an attempt to extend the copyright on the book as well as a the next battle in a long-standing dispute between the copyright holder and a separate foundation responsible for the museum at the house where the Frank family hid for some two years before being captured by the Nazis:

PARIS — When Otto Frank first published his daughter’s red-checked diary and notebooks, he wrote a prologue assuring readers that the book mostly contained her words, written while hiding from the Nazis in a secret annex of a factory in Amsterdam.

But now the Swiss foundation that holds the copyright to “The Diary of Anne Frank” is alerting publishers that her father is not only the editor but also legally the co-author of the celebrated book.

The move has a practical effect: It extends the copyright from Jan. 1, when it is set to expire in most of Europe, to the end of 2050. Copyrights in Europe generally end 70 years after an author’s death. Anne Frank died 70 years ago at Bergen-Belsen, a concentration camp, and Otto Frank died in 1980. Extending the copyright would block others from being able to publish the book without paying royalties or receiving permission.

In the United States, the diary’s copyright will still end in 2047, 95 years after the first publication of the book in 1952.

While the foundation, the Anne Frank Fonds, in Basel, signaled its intentions a year ago, warnings about the change have provoked a furor as the deadline approaches. Some people opposed to the move have declared that they would defy the foundation and publish portions of her text.

Foundation officials “should think very carefully about the consequences,” said Agnès Tricoire, a lawyer in Paris who specializes in intellectual property rights in France, where critics have been the most vociferous and are organizing a challenge. “If you follow their arguments, it means that they have lied for years about the fact that it was only written by Anne Frank.”

The museum has been working for five years with historians and researchers on an elaborate web version of the diary intended for publication once the copyright expires. The research is still progressing with a historical and textual analysis of her writing, including deletions, corrections and stains.

“We haven’t decided yet when or how the results will be published,” said Maatje Mostart, a spokeswoman for the Anne Frank House. “Any publishing will always be done within the legal frameworks.” She added pointedly that neither “Otto Frank nor any other person is co-author.”

One of Anne’s own astute diary entries seemed to anticipate the disputes: “Why do grown-ups quarrel so easily?”

Anne was 15 when she died at Bergen-Belsen. She had been arrested after someone alerted the authorities that the family had been hiding in the secret annex of a pectin factory on the Prinsengracht, or Prince’s Canal. Otto Frank was the family’s only survivor.

After arranging for her diary and notebooks to be published, he tried to secure Anne’s legacy. In 1960, he and the City of Amsterdam helped save the building where the family had hidden. (It became the Anne Frank House.)

Three years later, he set up the foundation in Switzerland to collect the diary’s royalties and distribute them to charities such as Unicef, children’s education projects and a medical fund that today supports about 50 gentiles who saved Jews during the war. He left her actual diaries and notebooks to the Dutch state.

“Effectively, Otto split up the legacy of his daughter, which one could say has created a bit of a nice mess ever since,” said Gerben Zaagsma, a historian of modern Jewish history at the University of Göttingen in Germany who is working on a scholarly edition of the diary backed by the foundation and Germany’s culture ministry.

The foundation does not publish yearly reports about its finances. But in recent years, it said it had donated about $1.5 million annually to hundreds of charitable organizations.

Six years ago, the foundation asked legal experts in various countries for advice on its copyright, according to Yves Kugelmann, a member of the foundation’s board. They concluded, he said, that Otto “created a new work” because of his role of editing, merging and trimming entries from her diary and notebooks and reshaping them into “kind of a collage” meriting its own copyright.

Merely declaring Otto the “co-author” on copyright filings extends the copyright, legal experts said, though such a stand could be tested in the courts. Readers would not see any changes on the books themselves, foundation officials said.

The foundation’s officials said that their aim is to “make sure that Anne Frank stays Anne,” Mr. Kugelmann said, by maintaining control and avoiding inappropriate exploitation of the work. “When she died, she was a young girl who was not even 16. We are protecting her. That is our task.”

Some critics of the foundation have already tested its resolve by posting bootleg copies of the diary online.

Olivier Ertzscheid, a lecturer in communications and researcher at the University of Nantes, received a warning letter this month from a French publisher of the diary after he started circulating a copy online in protest. He removed it, but he and a French politician, Isabelle Attard, said they were waiting to see what happens in January before pressing forward with a plan to encourage publication of the original manuscript more widely online.

“The best protection of the work is to bring it in the public domain, because its audience will grow even more,” said Ms. Attard, who noted that her own Jewish relatives were hidden or deported during the German occupation in France. “What is happening now is a bluff and pure intimidation.”

To a large degree, this latest move by the Swiss foundation appears to be the latest step in a long-simmering battle between it and the separate foundation that runs the Anne Frank Museum in Amsterdam over the legacy of Anne Frank and who gets to decide how that legacy is promoted. As noted above, the Amsterdam group has been working for some time now on an effort that would effectively make the book available online for free all over the world, including most likely here in the United States where the copyright on the book doesn’t expire until 2047 regardless of whether or not Otto Frank is considered a co-author of the book. Under European law, though, this distinction apparently does matter, and the fact that Otto didn’t die under 1980 means that using his death as a measuring date for the length of the copyright, rather than Anne Frank’s death at Bergen-Belsen in 1945, would extend the copyright set to expire at the end of this year for another thirty-five years. It would also mean that the European copyright would expire around the same time as the currently set expiration date of the U.S. copyright.

Not being an expert in European copyright law in any sense of the word, I’m not going to claim to comment on whether or not this move to name Otto Frank a co-author of the book thirty-five years after he died, and sixty-three years after its original publication date, has any legitimate basis in law. It does seem to me to be an odd move at the very least, and certainly something that would ordinarily set off legal battles, especially since it is happening less than two months before the current copyright would otherwise expire. In the end, though, it seems to be an effort by the Swiss foundation to maintain the flow of funds from the copyright that it holds as long as possible given the fact that expiration would mean that the efforts of the Amsterdam-based foundation to make the work available for free online would go a long way toward undercutting sales of the book worldwide, even in places like the United States where the copyright remains in effect for another thirty-two years. This effort is also likely related to the long-standing dispute between the two foundations over an archive related to Anne Frank’s time in hiding and other efforts, and there would seem to be no doubt that money is at the root at all of this. In that respect, it’s unfortunate that a work so important to understanding one part of a horrible time in European and world history is being turned into a legal football.