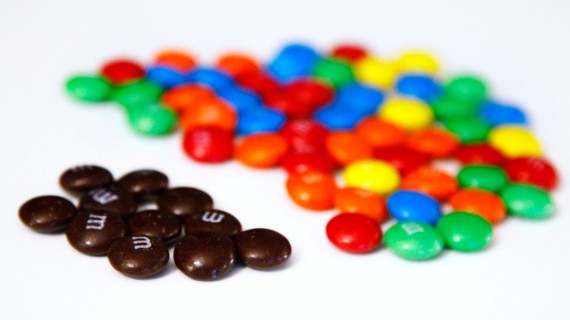 Right there on Page 40, in the “Munchies” section, nestled between “pretzels” and “twelve (12) Reese’s Peanut Butter Cups,” is a parenthetical alert so adamant you can’t miss it: “M&M’s,” the text reads, “(WARNING: ABSOLUTELY NO BROWN ONES).”

This is the famed rider to Van Halen’s 1982 concert contract. In a sentence fragment that would define rock-star excess forevermore, the band demanded a bowl of M&M’s with the brown ones laboriously excluded. It was such a ridiculous, over- the-top demand, such an extreme example of superstar narcissism, that the contract passed almost instantly into rock lore.

I don’t mean that the M&M language didn’t appear in the contract, which really did call for a bowl of M&M’s — “NO BROWN ONES.” But the color of the candy was entirely beside the point.

“Van Halen was the first to take 850 par lamp lights — huge lights — around the country,” explained singer David Lee Roth. “At the time, it was the biggest production ever.” Many venues weren’t ready for this. Worse, they didn’t read the contract explaining how to manage it. The band’s trucks would roll up to the concert site, and the delays, mistakes and costs would begin piling up.

So Van Halen established the M&M test. “If I came backstage and I saw brown M&M’s on the catering table, it guaranteed the promoter had not read the contract rider, and we had to do a serious line check,” Roth explained.

Call it the Van Halen Principle: Tales of someone doing something unbelievably stupid or selfish or irrational are often just stories you don’t yet understand. It’s a principle that often applies to Washington.

Klein offers several examples of seeming bureaucratic stupidity that have come under prominent derision, all of which make perfect sense when examined thoughtfully. He concludes:

It would be nice if the government’s mistakes were typically a product of stupidity, venality or bureaucracy. Then we would need only to remove the idiots, fire the villains and cut the red tape. More often, the outrageous stories we hear are cases of decent people trying to solve tough problems under difficult constraints that we simply haven’t taken the time to understand. That isn’t to suggest that people in government don’t get it wrong. They do, repeatedly. But if we want to get it right, we need to work harder to understand why they decided to remove the brown M&M’s in the first place.

First, there are a lot of brown M&M policies that made perfect sense when enacted whose original purpose has long since been obsolete but nonetheless continue through inertia or because some small, powerful group benefits greatly from continuing them.

Second—and conversely— there are a lot of seemingly outrageous incidents that are artifacts of the way bureaucracy works. Almost all of the stories of government bureaucrats paying $16 for muffins are of this type.

Oh, and watching David Lee Roth explain the brown M&M story while inexplicably dressed as a train conductor is priceless: