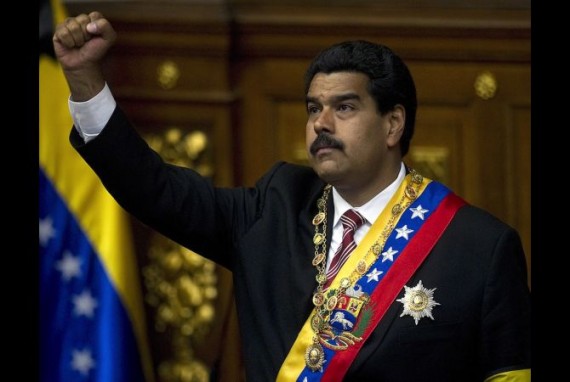 Venezuela has its own version of a birther movement:

(CNN) – Unable to defeat their political rival at the ballot box, some in the Venezuelan opposition are resorting to a tactic familiar to Americans: questioning the birthplace of the president.

In the United States, the so-called “birther” movement disputed President Barack Obama’s legitimacy, claiming that he was born in Africa and therefore is ineligible for the highest office. Even when Obama’s birth certificate was made public, some called it a forgery.

No birth certificate has been produced for Venezuelan President Nicolas Maduro.

Rumors of Maduro’s birthplace surfaced before he was elected in April, but in recent weeks they have gained new life.

In the Venezuelan version of the birther movement, its proponents say Maduro was born in neighboring Colombia and is either a Colombian citizen or a dual citizen, either of which would make him ineligible to be president.

The leaders of the movement have taken their complaint to Venezuela’s Supreme Court, to Colombian authorities, and even to the European Union.

The claim is controversial in Venezuela.

Maduro’s supporters ignore the question as nonsense, but some opposition political parties have asked the president to release a copy of his birth certificate.

“This is an international problem,” Pablo Medina, a member of the opposition group Patriotic Assembly, told CNN en Español.

Medina presented a letter to the European Union asking them to scrutinize Maduro’s nationality and take a position on the matter.

He went to the European Union because other governments “should know that any contracts or any agreements that they sign with Nicolas Maduro, a Colombian citizen, are invalid, illegal, null and void.”

The theory that Maduro is not eligible to be president is welcomed by some Venezuelans who see it as a sliver of hope to unseat him. Maduro, the hand-picked successor of the late Hugo Chavez, narrowly won the election. Venezuela remains a polarized country, and there is a feeling that some factions will latch on to any tactic to remove Maduro from power.

Others ignore the issue altogether, or look at it with curiosity.

The fact that Maduro’s birth record has not been located in either Venezuela or Colombia allows the doubts to persist.

No word on whether Donald Trump and Orly Taitz are planning to get involved in the case.