Words mean things. Unless they don't.

Wireless carriers have already demonstrated an inability to understand what “unlimited” actually means, offering phone plans that habitually throttle customers who use more than 26GB or so of data every month. However, with the release of its new Above Unlimited plan, Verizon is pushing the mental gymnastics carriers employ to define unlimited to a whole new level. 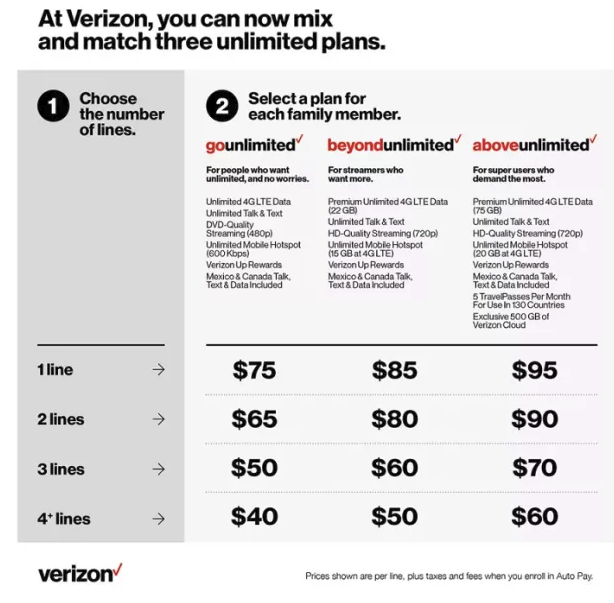 And as if that wasn’t bad enough, Verizon has also updated its convoluted sliding pricing scheme that adjusts based on how many phones are on a single bill. For families with four lines of service, the Above Unlimited cost $60 per person, but if you’re a single user the same service costs $95, which really seems like bullshit because if everything is supposed to be unlimited, it shouldn’t really make a difference how many people are on the same bill.

While Rutherford is fundamentally correct on his main point—“unlimited” has an unambiguous meaning and none of these plans match it—I’m not sure I have a real problem with any of this.

I’m a Verizon customer on an older “Unlimited” plan, from when “Unlimited” was their top tier, priced at $65 (plus lots of taxes and bullshit fees that bring the bill to way more than that, but that’s standard in the industry). It says right on my account that “After 22 GB used, speeds may be reduced in heavy network traffic.” But, since I seldom use more than 10 GB a month, that’s not much of a concern.

While I would use a lot more data if I didn’t also have a separate home broadband connection, allowing me to do most of my streaming and whatnot via WiFi vice my data plan, I’m still on the high side for American customers. The average is something like 2.76 GB a month.

Aside from the fact that the potential for throttling is transparent, I give the company slack for describing an amount of usage that’s far and away more than most customers will use as “Unlimited.” If I go to an “all you can eat” buffet, I expect to be able to eat a lot of food. But I wouldn’t blame a restaurant manager for telling a customer who stayed several hours and continued to graze that he was abusing the policy. Or, in perhaps a closer analogy, if a company offers “unlimited cloud storage” for photos, I’m not going to be upset with them if by “unlimited” they mean “up to 50 terabytes,” a limit that would impact only professional photographers.

And Verizon isn’t even doing that. It’s simply saying that, at an extremely high rate of usage, it reserves the right to slow the rate of data transfer during peak hours. Presuming that the throttling isn’t so slow as to effectively be a non-availability of data, that’s not particularly onerous. And, for that matter, another $10 a month isn’t exactly a huge penalty for power users.

For that matter, the base plan is also “limited” in terms of the quality of digital streaming (DVD vs HD) and outside-North America access. And, heck, even the advanced plans are probably limited to places in reach of a cell tower. But customers wouldn’t have a legitimate complaint that their “unlimited” data plan didn’t work while scuba diving or serving aboard the International Space Station.

And this complaint seems especially silly:

For families with four lines of service, the Above Unlimited cost $60 per person, but if you’re a single user the same service costs $95, which really seems like bullshit because if everything is supposed to be unlimited, it shouldn’t really make a difference how many people are on the same bill.

Returning to the buffet analogy, $10.99 all-you-can eat pizza does not entitle you to bring your family with you. Or to bring take-out boxes.