Wage Growth Over Past Ten Years Worse Than During Great Depression

The jobs market has been weak for much longer than just the past two years. 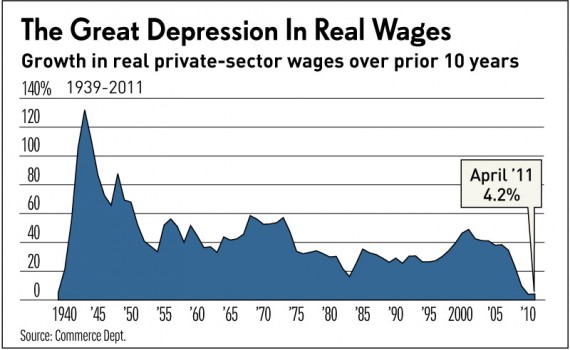 A rather astounding statistic from Investors Business Daily today that brings home not just the continued crisis in the jobs market, but the fact that things weren’t all that great during the recent period of low unemployment either:

The past decade of wage growth has been one for the record books — but not one to celebrate.

The increase in total private-sector wages, adjusted for inflation, from the start of 2001 has fallen far short of any 10-year period since World War II, according to Commerce Department data. In fact, if the data are to be believed, economywide wage gains have even lagged those in the decade of the Great Depression (adjusted for deflation).

Two years into the recovery, and 10 years after the nation fell into a post-dot-com bubble recession, this legacy of near-stagnant wages has helped ground the economy despite unprecedented fiscal and monetary stimulus — and even an impressive bull market.

Over the past decade, real private-sector wage growth has scraped bottom at 4%, just below the 5% increase from 1929 to 1939, government data show.

To put that in perspective, since the Great Depression, 10-year gains in real private wages had always exceeded 25% with one exception: the period ended in 1982-83, when the jobless rate spiked above 10% and wage gains briefly decelerated to 16%.

There are several culprits, of which by far the biggest has been the net loss of 2.7 million private nonfarm jobs since March 2001. (Government payrolls rose by 1.2 million over that span.)

That excess supply of labor has given employers the upper hand in holding back wage gains.

The one saving grace during a good part of the past ten years, of course, is that inflation has been kept relatively in check meaning that the small increase in real wages didn’t necessarily cause significant pain for the average American. With the economic downtown, the jobs crisis, and now an increase in commodity prices that has trickled down to the gas pump and the grocery store, that isn’t necessarily the case anymore. Not only do people need jobs, they need jobs that actually pay well,  and there don’t seem to be a lot of those around right now.

The more interesting question, of course, is why the period from 2001 to 2011 would be so different from any other time in American history since the end of the Cold War. Simple supply and demand, of course, is part of the reason but there’s more going on than that:

There is a dramatic, decade-long job shift that has occurred. The often higher-paying goods-producing sector, including construction and manufacturing, has shed 26% of its workers. Meanwhile, typically lower-paying service industries have kept growing their payrolls: social assistance (41%), nursing homes (21%), leisure and hospitality (10%).

“To the extent you have more hotels and fewer manufacturing jobs,” the changing composition of the work force has been a negative for wage growth, said John Silvia, chief economist at Wells Fargo Securities.

Behind this job shift is the globalization of production, which has fed “the substitution of capital for labor” amid a push for productivity and competitiveness.

“Brain, not brawn, is required” for today’s high-skilled factory jobs in the U.S., Silvia said.

A third trend is the increase in nonwage compensation — fueled by the growth of tax-free health care spending — which has eroded real wage gains.

A fourth factor, rising food and fuel prices, has taken a bite out of real wage growth in the past year.

Of these factors, only one — the extent to which the increased cost of non-wage compensation, especially health insurance, has replaced actual wage growth — is something that could conceivably be changed easily. The others, most especially globalization and that the fact that a high paying factory job requires different kinds of skills today than it did 30 years ago, are largely outside anyone’s control. That suggests that the days of double-digit growth in real wages may be behind us.

Frankly, these strike me as being structural problems for which there may be no solution. But we’re Americans, and we don’t like being told the truth.