So reports the BBC:  Ayman al-Zawahiri appointed as al-Qaeda leader

The statement announcing his appointment was posted on a militant website and attributed to al-Qaeda’s General Command.

It vowed that under Zawahiri, it would pursue jihad or holy war against the US and Israel "until all invading armies leave the land of Islam". 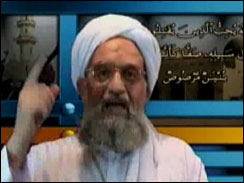