I was hoping to post this last Friday, but I just didn’t seem to get the time and then I forgot about it. Prof. Hamilton looks at some of the most recently released data and thinks it is consistent with a “soft landing” for the economy.

The Census Bureau reported today that September seasonally adjusted retail sales were down 0.4% compared with August. Most analysts took cheer from the fact that, if one excluded the plunge in gasoline, sales would instead have been up 0.6%. Notwithstanding, Barry Ritholtz argues that the sum of all sales is the relevant measure, and Calculated Risk thinks this means that inflation-adjusted retail sales declined overall in the third quarter. But even including everything, seasonally unadjusted September sales are still 5% above the September 2005 value. I read these data as consistent with the hypothesis that the economy is soft, but not crashing.

Also, the drop last month in federal tax receipts seems to have been a transitory event with receipts increasing in September to the point where receipts are at their highest since April of this year, and higher than September 2005.

Finally, Prof. Hamilton points to the University Michigan Index of Consumer Sentiment has rebounded rather strongly. Thus, things aren’t looking so bad now is Prof. Hamilton’s conclusion and this strikes me as the right take on the data.

Talking Down the Economy? 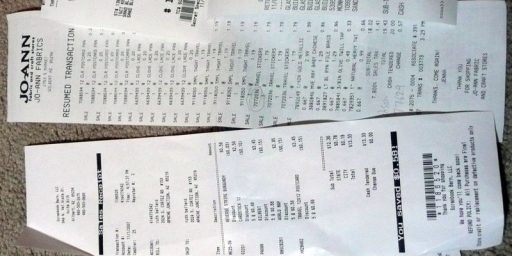