Mike Tanier of Football Outsiders explain why Aaron Rodgers' ranking as the best quarterback in NFL history is absurd. 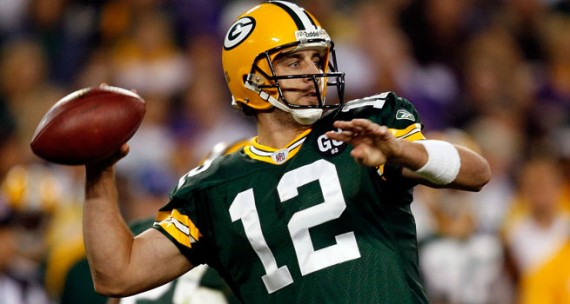 Mike Tanier of Football Outsiders explain why Aaron Rodgers’ ranking as the best quarterback in NFL history is absurd.

The NFL spent decades searching for the best statistic for ranking quarterbacks and selecting an official passing leader. The league ranked quarterbacks by passing yards, yards-per-attempt, touchdowns, and completion percentage, but no matter what stat they used, the results always came out flaky. Inevitably, the completion percentage leader was a part-time starter who barely threw enough passes to qualify, or the yardage leader a mad bomber for a terrible team forever playing catch-up.

The “best” quarterback — Johnny Unitas or Bart Starr — typically did a lot of things well, but not well enough to lead the league in any one category.

So the NFL decided they needed a new statistic, and the league formed a committee. That’s what the passer rating is — a stat developed by a committee. A committee that met in the early 1970s, when pocket calculators were the size of blimps.

The committee took four pretty good measures of quarterback quality — completion percentage, yards per attempt, touchdown percentage, and interception percentage — macerated them beyond recognition, then threw them in the slow-cooker until they boiled down into a numerical gruel. They then plated the results and served them to an unquestioning public.

In 1970, when the passer rating was in committee, the league completion percentage was 51 percent. It now hovers around 60 percent. Average quarterbacks in 1970 threw 28 percent more interceptions than touchdowns. Now, they throw about 21 percent fewer interceptions than touchdowns. In 1970, Bob Griese completed 58 percent of his passes and threw for 12 touchdowns and 17 interceptions. He led the Dolphins to a 10-4 record, made the Pro Bowl, and developed into a Hall of Famer. Alex Smith and Donovan McNabb put up similar (slightly better) numbers this season, and both lost their jobs.

NFL rules and strategies were very different in 1970. Cornerbacks could hold, but left tackles couldn’t. There were no empty backfield formations or tunnel screens to wide receivers. Quarterbacks threw less often, but the passes they did attempt were generally longer. The passer rating did a fine job selecting the best quarterback in the NFL in the context of the 1970s, rewarding efficient passers like Griese and Staubach over guys who just threw a lot.

Innovations like the West Coast Offense and the pass-friendly 1978 rules changes soon made the 1970 “averages” obsolete. Unfortunately, those averages are hard-wired into the rating formula. So the passer rating formula sees a quarterback with a 56 percent completion rate who averages an interception per game — a clearly “below average” quarterback — and rates him as above average in multiple categories! And when it’s fed Rodgers’ numbers, with completion percentages around 64 percent and very low interception rates, the formula practically short circuits.

Comparing Rodgers to someone like Staubach is like comparing a 2011 Honda Accord to a 1970 Chevelle. Both are great cars in their own way. But use 1970s criteria to evaluate the cars, and the Accord, with it’s mileage and modern technology, would blast the Chevelle off the track. The results would tell you little about the cars, but a lot about the out-of-date method of ranking them.

The passer rating is built exclusively from percentage stats, not raw totals. Percentage stats can go up and down during a quarterback’s career. As you know, quarterbacks usually play poorly as rookies, improve until they peak for a few seasons, then (if they are very good) hang around for a few seasons as their performance and statistics decline. A quarterback’s lifetime passer rating accounts for all three phases of his career: rise, peak, fall.

Now, look at Rodgers’ career. It’s all peak. He spent his “rise” throwing 59 passes in three years while waiting for Brett Favre to cut bait. He hasn’t had time to fall yet.

As quarterbacks age, the law of averages starts to temper their statistics, which is why Brady, Manning, Roethlisberger and Brees have slipped below the newcomers. Brady and Manning will probably wind up like Young and Montana, hovering at the top of the list forever, but always wedged among a bunch of young guns coming off two or three hot seasons. They deserve better. The league should raise the minimum pass attempt requirement for the career rating list from 1,500 passes to 2,500. That would cut our Rodgers Romo, and Rivers for at least another season, forcing them to prove a little more before they sneak into a club that’s too exclusive for them.

Rivers, second all-time, shares a similar resume. He spent two seasons behind Drew Brees instead of throwing stat-deflating interceptions. Romo (third) hung around the bench for several seasons and was more-or-less at his peak the moment he stepped on the field. Call it the “Iceberg” Theory: Active quarterbacks often reach the top of the passer rating list because we only see the tip of their iceberg.

I recall as a kid, 30-odd years ago, when Cowboys quarterback Danny White was in exactly the same position as Rodgers is now. Upon the 1500th attempt, he was the number one quarterback in NFL history, supplanting his predecessor, Roger Staubach. Nobody thought it was true. Within a few weeks, a kid named Joe Montana supplanted White and nobody believed that, either. Until a decade or so later, when they did.

Some of the greatest quarterbacks every –Stabubach, Unitas, Bradshaw — are blips on the QB ranking scale, ranking so far beyond today’s mediocre QBs that it’s not even funny. But quarterback is, alone among the so-called “skill positions,” unmeasurable by a single stat. People have a sense of who’s great and who’s not, but there really isn’t a widely used stat that works. Passer Rating is an index, but a complicated one that doesn’t really make any sense.

Rodgers is actually an exceptionally good quarterback. He’s arguably among the four or five best in the game right now. But the best ever? Not hardly.