About That Libya Question In Last Night’s Debate

What's the truth about last night's debate exchange about Libya? 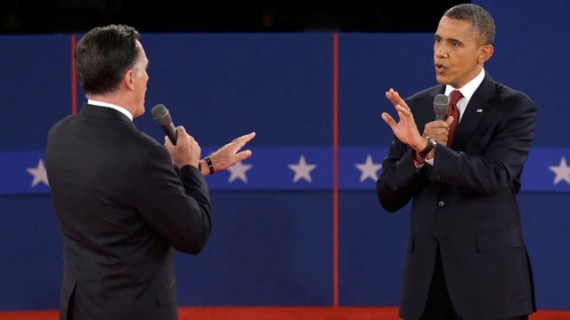 As I noted in my debate wrap-up this morning, perhaps the worst exchange of the night for Mitt Romney came in response to an audience members question regarding the attack on the U.S. Consulate in Benghazi. In retrospect, it should have been a fairly easy exchange for Romney to handle. After all, this was one of the most unfortunate foreign policy developments of Obama’s Presidency, historic in the sense that it was the first time an American Ambassador had died in service since 1979, and the Obama Administration’s own response to the event has been muddled, befuddled, and downright confusing. It was also, quite obviously, a question that President Obama came prepared for, as we can see by actually watching the exchange:

Romney clearly seemed a bit dumbfounded by the President’s claim to have recognize the attack on the consulate as a terrorist attack from the beginning, and I have to admit that I was too because it simply doesn’t comport with reality. For at least two full weeks after the attack, the Obama Administration pushed the narrative that the attack was a spontaneous action brought about by protests over an obscure YouTube film that had started in Cairo earlier that day. On the Sunday following the attack, U.N. Ambassador Susan Rice went on multiple news shows pushing exactly that line. While that line was being pushed in public here in the U.S. the President of Libya and other Libyan officials, were saying that the attack was a pre-planned terrorist attack. Moreover, as we learned more about what happened the night of September 11th in Benghazi., it began to seem as though calling it an spontaneous event rather than a pre-planned attack simply made no sense. It wasn’t until two full weeks later that the White House said on the record that the attack was terrorist attack and by that time we were beginning to learn additional details which seemed to suggest that, behind the scenes, they knew the real story behind the attack. Finally, just last week, the State Department reported that there was no protest in Benghazi at all on the day of the attack, thus completely undercutting the original narrative behind the attack.

So, what exactly, was Obama referring to when he claimed that he had called the attack an act of terror the day after it happened? He’s referring to this speech he made in the Rose Garden on September 12th:

THE PRESIDENT:  Good morning.  Every day, all across the world, American diplomats and civilians work tirelessly to advance the interests and values of our nation.  Often, they are away from their families.  Sometimes, they brave great danger.

Yesterday, four of these extraordinary Americans were killed in an attack on our diplomatic post in Benghazi.  Among those killed was our Ambassador, Chris Stevens, as well as Foreign Service Officer Sean Smith.  We are still notifying the families of the others who were killed.  And today, the American people stand united in holding the families of the four Americans in our thoughts and in our prayers.

The United States condemns in the strongest terms this outrageous and shocking attack.  We’re working with the government of Libya to secure our diplomats.  I’ve also directed my administration to increase our security at diplomatic posts around the world.  And make no mistake, we will work with the Libyan government to bring to justice the killers who attacked our people.

As Americans, let us never, ever forget that our freedom is only sustained because there are people who are willing to fight for it, to stand up for it, and in some cases, lay down their lives for it.  Our country is only as strong as the character of our people and the service of those both civilian and military who represent us around the globe.

No acts of terror will ever shake the resolve of this great nation, alter that character, or eclipse the light of the values that we stand for.  Today we mourn four more Americans who represent the very best of the United States of America.  We will not waver in our commitment to see that justice is done for this terrible act.  And make no mistake, justice will be done.

You can read the full text of  the speech at the link and you can watch the video on YouTube.

Reading the speech, I can see why Obama’s people thought it provided him with a convenient out for the charge that Romney made, but I think it misses the mark. Obama’s sole reference to terrorism is a generic reference to “acts of terror,” at no point during the speech did he call the attack itself an act of terror. And, in fact, his Administration conspicuously avoided using that word or anything similar to it for a full two weeks afterward. At the best, the Rose Garden comments are ambiguous, which is actually a pretty apt description of the Administration’s entire response to the Benghazi attack. It’s also worth noting that on September 25th, some two weeks after the attacks, the President specifically refused to call the Benghazi attack terrorism in response to a direct question. This was several days after Matt Olsen, the director of the National Counterterrorism Center said during Congressional testimony that the attack was indeed a terrorism.

The Washington Post’s Glenn Kessler makes this observation about the controversy:

What did Obama say in the Rose Garden a day after the attack in Libya? ”No acts of terror will ever shake the resolve of this nation,”  he said.

But he did not say “terrorism”—and it took the administration days to concede that that it an “act of terrorism” that appears unrelated to initial reports of anger at a video that defamed the prophet Muhammad.

And, after the debate, even Candy Crowley herself conceded that Romney had a point:

Crowley has a point here. Romney made a mistake by focusing on the “terrorism” issue, instead, he should have made note of the fact that the President’s response to the question that was asked about the Libya attack completely failed to address a far more important issue than whether a certain word was used. Romney could have  pointed out that, notwithstanding this one use of the word “terror” in one speech on September 12th, the Administration continued to push on the public and Congress a narrative that the attack was the spontaneous result of protests over a movie that we now know, and knew relatively early on according to the information that has come out over the past month, that there was no protests in Benghazi last night. He could have asked the President why his Administration was pushing a palpably laughable version of events rather than being honest with the American people.

That, however, isn’t where Romney really messed up last night. To see where that happened, let’s take a look at the question that actually started this whole exchange:

Q: This question actually comes from a brain trust of my friends at Global Telecom Supply in Mineola yesterday. We were sitting around talking about Libya, and we were reading and became aware of reports that the State Department refused extra security for our embassy in Benghazi, Libya, prior to the attacks that killed four Americans. Who was it that denied enhanced security and why?

This question was the center point of last week’s Congressional hearings. We learned from those hearings that there had been several requests for additional security at the diplomatic compounds in Libya, including a request mere weeks before the attack that a special enhanced team of security personnel that were scheduled to leave the country on August 31st be permitted to stay. Those requests were either denied or outright ignored. Additionally, we know that Ambassador Stevens himself had expressed considerable concern about the security situation in the country in his communications with Foggy Bottom, but apparently the people who received those communiques determined that no additional action to protect American diplomats was necessary. The President completely failed to answer the question that was posed to him last night, and Romney let him get away with it.