The career of Larry Schwartz, who is the Counselor for Public Affairs at the US Embassy in Cairo, is over. 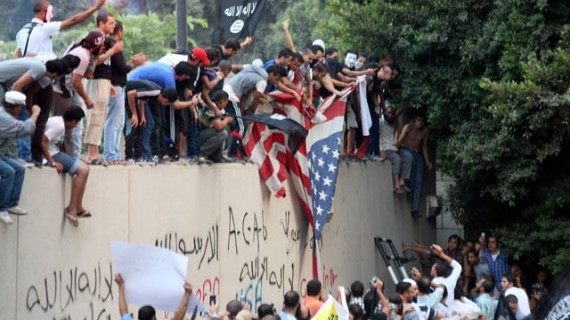 The Tweet out of the American Embassy in Cairo that seemed to both equate violence and insulting speech has been roiling the political waters — not to mention the whole of the Internets — for the past day.

I took particular interest in the story because Public Affairs in the Middle East was my career. Twitter was still in the future by the time I retired, but putting out press statements was certainly part of the daily grind. The tricky part was that when a statement came out from an embassy, it was not only a statement from the embassy, but represented the position of the American government, Administration, and by proxy, the American people. It was not something one dashed off nor was it a place for personal thoughts on a subject. In the field, American Foreign Service Officers are not permitted to express personal thoughts because they will be taken as statements of policy.

When I read the stories flying around about this particular Tweet, I figured it was something that came off the thumbs of a junior officer, one mostly likely assigned to the Office of Public Affairs, though there was a possibility that it came from one in the Political Section, maybe even the Consular Section.

Foreign Policy magazine gives us the down and dirty. The Tweet was the product of the a member of the Senior Foreign Service, Larry Schwartz, who is the Counselor for Public Affairs at the Embassy in Cairo. That position is responsible for cultural and information programs for the whole of Egypt. Not only was his press release off the mark, but he was instructed by the Department to not send it out. But send it he did. He later defended it through a series of Tweets.

Inside the public relations disaster at the Cairo embassy
Josh Rogin

One staffer at the U.S. Embassy in Cairo was responsible for the statement and tweets Tuesday that have become grist for the presidential campaign, and that staffer ignored explicit State Department instructions not to issue the statement, one U.S. official close to the issue told The Cable.

Two additional administration officials confirmed the details of this account when contacted late Wednesday by The Cable.

The statement, issued as a press release on the U.S. Embassy website, has been attacked by Republican challenger Mitt Romney, lawmakers, and conservatives around the country as an inappropriate “apology” and a failure to stand up for American principles such as freedom of speech.

The White House distanced itself from the statement Tuesday, and Romney criticized it directly in his initial reaction to the attacks in Egypt and Libya shortly thereafter, accusing President Barack Obama of evicing sympathy for the attackers.

… Before issuing the press release, Schwartz cleared it with just one person senior to himself, Deputy Chief of Mission Marc Sievers, who was the charge d’affaires at the embassy on Tuesday because Ambassador Anne Patterson was in Washington at the time, the official said.

“The statement was not cleared with anyone in Washington. It was sent as ‘This is what we are putting out,'” the official said. “We replied and said this was not a good statement and that it needed major revisions. The next email we received from Embassy Cairo was ‘We just put this out.'”
…

I don’t know how close to retirement Mr Schwartz is. Even though we appear to have had similar assignments, we never worked together in the same office. I do recommend he start getting his CV in order, though, because a foul-up as major as this should kill his career, honorable as it has been.

John Burgess retired after 25 years as a US Foreign Service Officer, serving predominantly in the Middle East. He contributed 35 pieces to OTB between February 2006 and April 2014. He was the proprietor of the influential Crossroads Arabia until his death in February 2016.

What Is a Moderate Muslim, Part II