Mitt Romney's initial response to the attacks in Egypt and Libya displayed a tendency to jump the gun rather than wait for the facts. 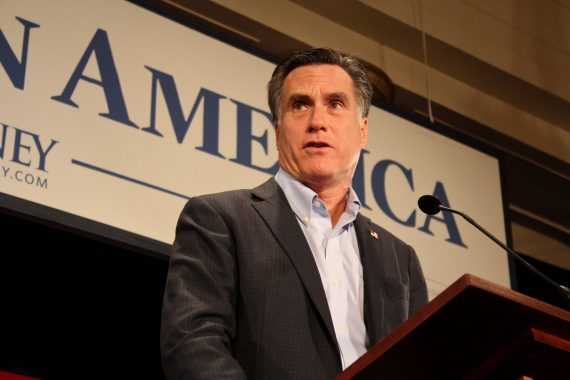 Even before the world knew that yesterday’s protests in Libya and Egypt had resulted in the deaths of four American diplomats, the political battles over the events of the day had already begun:

JACKSONVILLE, Fla. — For the Romney campaign, the day began with a somber nod toward campaign civility, and ended with some of the most biting criticism of President Obama to come out of its Boston headquarters all year.

At 10:09 p.m., campaign spokeswoman Andrea Saul e-mailed press with a statement by Mitt Romney responding to the attacks on U.S. embassies in Egypt and Libya.

The assertion that the administration sympathized with attackers was derived from a statement by the U.S. Embassy in Cairo — before the compound was breached — criticizing an anti-Muslim film that “hurt the religious feelings” of others. Even after coming under attack, the Embassy spent much of the day defending and reasserting the statement on Twitter.

Whether Obama deserved the blame for the Embassy’s messaging is a point of debate; what was not was the news value of Romney’s harsher-than-expected statement. Still, reporters initially refrained from making it public, because the statement came with a midnight embargo — with the campaign requesting that press not report it until the September 11th anniversary was officially done.

But then, 15 minutes later, the campaign appeared to change its mind, and Saul told reporters the embargo was lifted and the statement could be published immediately.

Saul didn’t immediately respond to BuzzFeed’s request for an explanation, but one aide did say the initial reasoning for the embargo was “probably” to respect the 9/11 anniversary.

As Jeffrey Goldberg points out, the Romney campaign wasn’t the only Republican to be heard from:

Republican Party Chairman Reince Priebus (@Reince) tweeted out the following before news of the murder of the U.S. ambassador in Libya, but after the sustained attacks on U.S. diplomatic facilities there and in Egypt: “Obama sympathizes with attackers in Egypt. Sad and pathetic.”

There’s no proof for this assertion, of course — the mealy-mouthed tweets coming from the Cairo (the ones seemingly sympathizing with the pre-enlightenment types who believe that blasphemers deserve to be murdered) were written by embassy staff and were disavowed by the Obama Administration.

And, it didn’t take long for the Obama campaign to fire back:

The Obama campaign fired back, accusing Romney of trying to politicize the tragedy, that included the death of a State Department employee.

“We are shocked that, at a time when the United States of America is confronting the tragic death of one of our diplomatic officers in Libya, Governor Romney would choose to launch a political attack,” campaign spokesman Ben LaBolt said.

Let’s start from the beginning here. The statement by the Romney campaign and Chairman Priebus that the Obama Administration as sympathizing with the attackers in Cairo and Benghazi is based entirely on a statement that was issued by the U.S. Embassy in Cairo that included sentences such as this “Respect for religious beliefs is a cornerstone of American democracy. We firmly reject the actions by those who abuse the universal right of free speech to hurt the religious beliefs of others.”  There were, however, two crucial facts that the Romney campaign didn’t wait to find out before issuing their statement. First of all, it turns out that the statement itself was issued before the protests actually started, and certainly before the tragic attack in Benghazi that resulted in the deaths of Ambassador Stevens and three others. That doesn’t necessarily make the statement acceptable, of course, but the context is important because the Romney campaign’s statement makes it seems as though the embassy statement was made in response to the embassy protests, and that’s simply not the case. The second fact that the Romney campaign’s decision to speak out in haste obscured is the fact that the White House and State Department almost immediately disavowed the Cairo Embassy statement when it became public:

The Obama administration is disavowing a statement from its own Cairo embassy that seemed to apologize for anti-Muslim activity in the United States.

“The statement by Embassy Cairo was not cleared by Washington and does not reflect the views of the United States government,” an administration official told POLITICO.

The U.S. embassy in Cairo put out a statement early Tuesday that apologized for an anti-Muslim film being circulated by an Israeli-American real estate developer.

“The Embassy of the United States in Cairo condemns the continuing efforts by misguided individuals to hurt the religious feelings of Muslims – as we condemn efforts to offend believers of all religions,” the embassy said in a statement published online.

The embassy came under widespread criticism for failing to defend free speech in the face of threats of violence. Egyptian protesters rioted anyway, breaching the embassy walls and tearing down the American flag.

“Some have sought to justify this vicious behavior as a response to inflammatory material posted on the Internet. The United States deplores any intentional effort to denigrate the religious beliefs of others. Our commitment to religious tolerance goes back to the very beginning of our nation. But let me be clear: There is never any justification for violent acts of this kind,” Secretary of State Hillary Clinton said in a Tuesday statement

In retrospect, especially in the wake of this morning’s news of the death of Ambassador Stevens, the Romney statement from last night looks like a crass, amateurish attempt to score political points off of a tragedy. Indeed, it’s worth noting that the statements the campaign has released in the wake of the news about the Ambassador have been far more subdued and don’t even mention politics at all. If they had the chance to take that press release back, I have a feeling that they would. But, there are no second chances in a situation like this. Not only did the Romney campaign jump the gun in the middle of what can rightfully be characterized as an unfolding international crisis, but they did so on a day when they had said they were refraining from politics. The fact that the press release was initially embargoed for release until after midnight and then, for some bizarre reason, that embargo was lifted, strikes me as an amateur hour tactic that just makes the Romney press shop look bad. There may have only been about 90 minutes left in the day, but it was still September 11th and if you’re going to promise to refrain from political attacks on that day you ought to live up to that promise.

In any event, the Romney campaign’s bungling of the initial response to this tragedy is just one example of the potential dangerous of an international crisis erupting in the middle of a Presidential campaign. Even for President Obama, everything that he does in response to these events is going to be heavily scrutinized, and he may find himself boxed into a course of action by the politics of the matter regardless of what the situation on the ground might be. For Mitt Romney, though, the incident reveals the problem of jumping the gun in situations like this. Rather than trying to politicize the situation before all the facts were in, it would have been far better for Romney to remain quiet and let the facts come in first. Indeed, that would be the appropriate reaction from a President Romney should he win the election and something like this happen under his watch.

The truth of the matter is that there are not easy answers here, even though politics always demands easy answers. Even if we wanted to retaliate, how exactly do we do that and who do we retaliate against? The vast majority of the people of Egypt and Libya had nothing to do with what happened yesterday, and there’s no indication that either government did. So, who exactly do we retaliate against here? I’m not sure I know the answer, but I’m pretty sure that issuing half-assed statements in the middle of the night before you know all the facts isn’t the right answer.