Hillary Clinton: “I Take Responsibility” For What Happened In Benghazi

Falling on the sword? 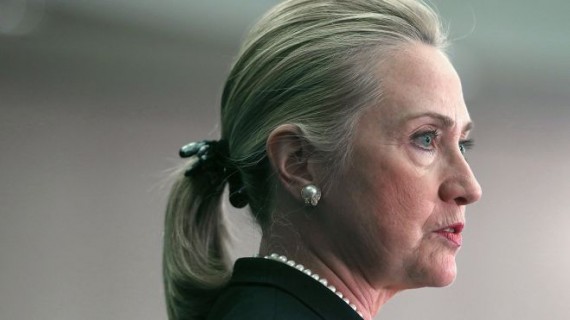 A frank, and I must say surprising, statement from the U.S. Secretary Of State:

Secretary of State Hillary Clinton said the bucks stops with her when it comes to who is blame for a deadly assault on the U.S. diplomatic mission in Benghazi.

“I take responsibility” for what happened on September 11, Clinton said in an interview with CNN’s Elise Labott soon after arriving in Lima, Peru for a visit. The interview, one of a series given to U.S. television networks Monday night, were the first she has given about the attack on the U.S. consulate in Benghazi.

“I want to avoid some kind of political gotcha,” she added, noting that it is close to the election.

The attack killed Chris Stevens, the U.S. ambassador to Libya, and three other Americans at the consulate.

Clinton also sought to downplay the criticism that administration officials continued to say the attack was a spontaneous product of a protest over an anti-Muslim film, a theory that has since been discarded.

In the wake of an attack, there is always “confusion,” Clinton said. But the information has since changed, Clinton said in the interview.

The secretary of state also described the desperate scene in the State Department during the hours of the attack on the night of September 10. It was an “intense, long ordeal” as staff tried to find out what had happened.

Clinton said her mission now is to make sure such an attack will never happen again – but also that diplomacy, even in dangerous areas like Benghazi, is not stopped.

I’ll update this post as the story develops, but this is a rather interesting political development. Clinton taking responsibility for the security failures in Benghazi arguably clears the President and the White House in the controversy that has developed surrounding the reaction of the Administration to the attack. Although, of course, the President is always ultimately responsible for what his Administration does regardless of who makes the decision. It’s interest to the extent that Secretary Clinton has essentially agreed to take the sword for whatever the fallout from the Benghazi may end up being. She may not care about that so much given that she’s already said that she does not intend to stay at Foggy Bottom if there is a second Obama term, of course, but it still strikes me as a somewhat extraordinary event to see a Secretary of State take the fire so publicly for what could be a serious political problem for the President, especially considering that the President in question is a former political rival. Finally, perhaps this indicates that Secretary Clinton really means what she said when she said so many times over the past year and a half or so that she had no intention of ever running for office ever again.

Update: The interview itself has not been posted yet, but here’s Erin Burnett talking to the CNN reporter who interviewed Secretary Clinton:

Update #2: Here’s the interview itself: