Contrary to what was believed, it does not appear that there was any protest taking place when the Benghazi Consulate was attacked.

Reports on the ground from Libya are  seriously contradicting an important part of the White House narrative regarding the attack on the U.S. Consulate in Benghazi last Tuesday:

An intelligence source on the ground in Libya told Fox News that there was no demonstration outside the U.S. Consulate in Benghazi prior to last week’s attack — challenging the Obama administration’s claims that the assault grew out of a “spontaneous” protest against an anti-Islam film. “There was no protest and the attacks were not spontaneous,” the source said, adding the attack “was planned and had nothing to do with the movie.” The source said the assault came with no warning at about 9:35 p.m. local time, and included fire from more than two locations. The assault included RPG’s and mortar fire, the source said, and consisted of two waves.

This Fox report comes just a few days after McClatchy is reporting that one of the guards wounded in the attack says that there was no protest in front of the embassy prior to the attack:

BENGHAZI, Libya — A Libyan security guard who said he was at the U.S. consulate here when it was attacked Tuesday night has provided new evidence that the assault on the compound that left four Americans dead, including the U.S. ambassador to Libya, was a planned attack by armed Islamists and not the outgrowth of a protest over an online video that mocks Islam and its founder, the Prophet Muhammad. The guard, interviewed Thursday in the hospital where he is being treated for five shrapnel wounds in one leg and two bullet wounds in the other, said that the consulate area was quiet – “there wasn’t a single ant outside,” he said – until about 9:35 p.m., when as many as 125 armed men descended on the compound from all directions. The men lobbed grenades into the compound, wounding the guard and knocking him to the ground, then stormed through the facility’s main gate, shouting “God is great” and moving to one of the many villas that make up the consulate compound. He said there had been no warning that an attack was imminent. “Wouldn’t you expect if there were protesters outside that the Americans would leave?” the guard said. (…) The attack itself, the guard said, was immediate and bold, initiated by a group of men who approached the compound and lobbed grenades over the wall. Just behind them were scores of men, shooting wildly and yelling “God is great.” The guard, who said he’d been hired seven months ago by a British company to protect the compound, said the first explosion knocked him to the ground, and he was unable to fire his weapon. Four other contracted guards and three members of Libya’s 17th of February Brigade, a group formed during the first days of the anti-Gadhafi uprising and now considered part of Libya’s military, were protecting the outside perimeter of the compound. After storming through the gate, the guard said, the men rushed into one of the compound’s buildings, meeting no resistance. The guard did not say whether that was the building where the ambassador was. Thirty minutes later, the guard said, he realized he was about to lose consciousness and asked one of the attackers for help, saying he was merely a gardener at the compound. The man agreed to drive him to the hospital. As they were leaving, the guard said he saw the attackers enter a second villa on the compound.

The White House response to these reports is basically to just say that the Libyans, who are actually on the ground, don’t know what they’re talking about, although they did make one interesting concession:

U.S. officials, in response to the claim that there was no demonstration at the time of the attack, told Fox News there was a small protest earlier in the day — but they did not dispute that there was no significant or sizeable demonstration at the time. But a senior Obama administration official told Fox News on Monday morning that the Libyan president’s comments are not consistent with “the consensus view of the U.S. intelligence community,” which has been investigating the incident, and are accordingly not credible. “He doesn’t have the information we have,” the U.S. official said of Libyan President Mohammed el-Megarif.  ””He doesn’t have the (data) collection potential that we have.”

It’s worth noting that initial reports of any incident like this don’t always turnout to be complete. However, up until now, the public story had always been, or at least implied, that the attack occurred contemporaneous with the protests but now even the U.S. Government is admitting that isn’t the case. The attack, clearly, occurred several hours later. This makes the claim that Ambassador Rice made yesterday that the attack was all about a movie and wasn’t pre-planned even harder to believe. The idea that the attack was spontaneous, which doesn’t seem credible to begin with given what we know about how it happened, becomes even less believable once you realize that the  attack occured several hours after a small protest against the movie. That fact alone makes the idea that there was any real connection between the two events even less likely, especially since the attackers clearly used the cover of darkness, and surprise, to launch their attack. That doesn’t seem like the  action of a bunch of protesters riled up by a movie. This incident needs to be investigated thoroughly, and the Administration needs to be honest with the American people about what happened, because that does not appear to be what’s happening now. 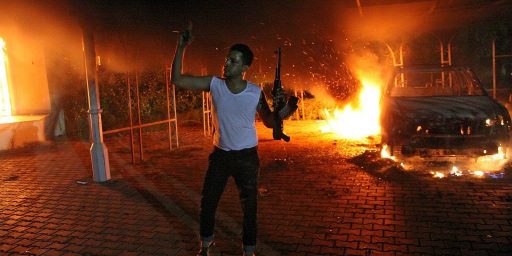