YahooNews apparently thought the better of their headline “Report: Abstinence not curbing teen sex,” which is rather like saying “Eating not curbing hunger,” and replaced it with the more logically consistent “.”

We pretty much already knew that, but here’s the gist of the story:

Programs that focus exclusively on abstinence have not been shown to affect teenager sexual behavior, although they are eligible for tens of mil lions of dollars in federal grants, according to a study released by a nonpartisan group that seeks to reduce teen pregnancies. “At present there does not exist any strong evidence that any abstinence program delays the initiation of sex, hastens the return to abstinence or reduces the number of sexual partners” among teenagers, the study concluded.

The report, which was based on a review of research into teenager sexual behavior, was being released Wednesday by the nonpartisan National Campaign to Prevent Teen and Unplanned Pregnancy. The study found that while abstinence-only efforts appear to have little positive impact, more comprehensive sex education programs were having “positive outcomes” including teenagers “delaying the initiation of sex, reducing the frequency of sex, reducing the number of sexual partners and increasing condom or contraceptive use.” “Two-thirds of the 48 comprehensive programs that supported both abstinence and the use of condoms and contraceptives for sexually active teens had positive behavior effect,” said the report.

Steven Taylor had the same reaction to the old headline as I did and was similarly unsurprised by the finding. His commenter, Buckland, however, raises several interesting points about the research, including wondering why this was not subjected to peer review and noting that “non-partisan” is not the same thing as unbiased.

Surely true. Still, as Steve Benen notes, pretty much every study ever done on this subject yields similar results.

Moreover, a look at the National Campaign to Prevent Teen and Unplanned Pregnancy’s Board of Directors yields some surprising names: Thomas H. Kean (Chairman), Linda Chavez, Nancy L. Johnson, Vincent Weber, Charlotte Beers, Nancy Kassebaum-Baker, C. Everett Koop, and others. Not exactly the Christian Coalition, to be sure, but all very respectable Republicans. This isn’t the Coalition to Get Our Kids Pregnant under an innocuous name. 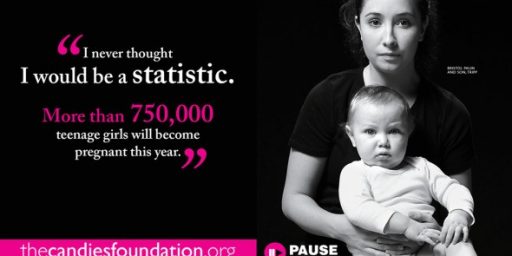