New technology brings the day of round the clock tracking of citizens who've done nothing wrong ever closer. 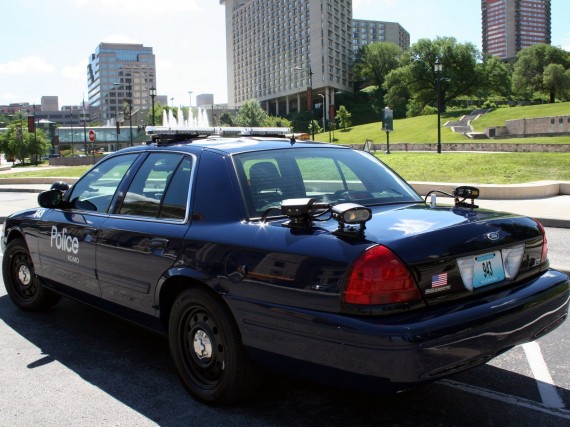 A new report from the American Civil Liberties Union reveals the existence of technology that allows police to record the license plate of every car an officer encounters while on patrol, catalog it, and compare it to a database of suspect vehicles:

(CNN) – Police around the United States are recording the license plates of passing drivers and storing the information for years with little privacy protection, the American Civil Liberties Union said Wednesday.

The information potentially allows authorities to track the movements of everyone who drives a car.

The ACLU documented the police surveillance after reviewing 26,000 pages of material gathered through public records requests to almost 600 local and state police departments in 38 states and the District of Columbia.

Police are gathering the vehicle information with surveillance technology called automatic license plate readers, and it’s being stored — sometimes indefinitely — with few or no privacy protections, the ACLU said.

“The documents paint a startling picture of a technology deployed with too few rules that is becoming a tool for mass routine location tracking and surveillance,” the ACLU said in a written statement.

The license plate readers alert police to an automobile associated with an investigation, “but such instances account for a tiny fraction of license plate scans, and too many police departments are storing millions of records about innocent drivers,” the ACLU said.

“Private companies are also using license plate readers and sharing the information they collect with police with little or no oversight or privacy protections. A lack of regulation means that policies governing how long our location data is kept vary widely,” the ACLU said.

The civil liberties group is advocating legislation regulating the use of the technology.

Law enforcement, of course, considers the technology a valuable tool:

“LPR is not an invasion of privacy, but rather a tool for law enforcement to better accomplish its mission to protect and serve. The onus is on law enforcement agencies and governing bodies to ensure that they have proper policies in place for disciplined and responsible use, with appropriate punishments for anyone operating outside of policy,” the union said.

The ACLU report cited how the Minneapolis Star Tribune in 2012 tracked the movement of the Mayor R.T. Rybak’s car 41 times at a license police reader in the prior year. The newspaper put the information on a map and gathered the data through public records requests.

The newspaper found that the police department’s plate readers yielded hits of fewer than 1% of the 805,000 plate scans made in June 2012, according to the ACLU

As the ACLU asks, this raises serious questions about how these programs impact the other 99% of us:

Should the government be logging for months, years, or indefinitely the movements of the other 99 percent of people, who are innocent?

The answer to this question is no. License plate reader information can be very revealing. While one snapshot at one point might not seem sensitive, as blankets of plate readers cover our streets, and as the government stores data for longer and longer, the technology quickly morphs into a powerful tracking tool.

As computer technology and storage capacity get cheaper every year, we need to prepare for a future not just where there are a few license plate reader cameras in every town, but one in which there are multiple cameras on every block.

What can location data reveal about people? Trips to places of worship, political protests, or gun ranges can be paowerful indicators of people’s beliefs. Is it really the government’s business how often you go to the drug store or liquor store, what doctors you visit, and the identities of your friends? I’m sure all of us can remember something from our past that could embarrass us. If the government comes to suspect you of something in 2020, should it have access to databases stretching back years that could dig up facts about you that previously went unnoticed?

Off the top, it’s necessary to address some of the same legal and Constitutional issues that came up when we first learned about the National Security Agency’s metadata collection programs. For one thing, there does not appear to be on the surface any per se Constitutional objection to a police officer taking note of the license plates of the vehicles around him or her while out on patrol. Indeed, ever since there have been computers in patrol cars hooked into the relevant databases, it’s been common practice for officers to tap in license plate numbers while waiting in traffic or at stop lights. If a hit comes up — such as a car owned by someone who has a suspended license, or a car on the list of stolen cars — then the officer will typically either pull the car over since they now have reasonable suspicion to do so, or follow the car until further instructions are received. There’s no 4th Amendment violation here because you don’t have a reasonable expectation of privacy in your license plate number and, indeed, you most assuredly don’t if you’re sitting in a traffic jam with a police car directly behind you.  The fact that the same thing is being done with technology tied into a central database doesn’t really change the 4th Amendment analysis in the end, but that’s only part of the issue.

As with the NSA Metadata issue, the concern with a program like this isn’t just with the question of whether or not its legal, but with what is being done with that data. Before this readers, it simply wasn’t physically possible for a police officer to take note of every single license plate on every car that he or she passes on a given day, much less track all those numbers against a database and place them in another database that will be kept for an unknown period of time. As Conor Freidersdorf notes, this raises some serious concerns:

Driving down the street, I have no reasonable expectation that my license-plate number won’t be jotted down by someone. But I am aghast at the notion that it could be recorded on all major streets, at all times, with each scan aggregated in a massive database and stored forever. I’m confident that the men who wrote and ratified the Fourth Amendment would be similarly aghast. The technology is here, and increasingly being used.

There isn’t much time left to stop it.

I’m not sure it can be stopped completely. As I noted and Conor admits in his opening sentence, there likely isn’t a 4th Amendment concern in the use of the technology itself so a direct attack on that is unlikely to be successful. As with the metadata, the issue we ought to be concerned with is how the technology is being used, and what’s happening to all the data that it collects. How long are the license plate numbers collected that don’t match up to something kept? Who has access to them? Who could they be shared with and for what purposes? These are only some of the questions that a massive data collection effort like this raises.  Some of them can be answered by Courts utilizing the outlines of the 4th Amendment to place limits on what law enforcement can do with this sort of technology, just as Courts are just now starting to address the proper limits of GPS tracking technology by law enforcement. Other limits will have to be addressed by legislatures, both Federal and state, put under pressure by the public to protect privacy in an era where its beginning to feel like privacy is dying. The technology genie is out of the bottle, but we still have time to get it under some degree of control if we act.

FILED UNDER: Intelligence, Law and the Courts