Young Adolf Hitler Campbell was denied a birthday cake by his local supermarket and had to go to WalMart instead. Heath Campbell, left, with his wife Deborah and son Adolf Hitler, 3, pose in Easton, Pa., Tuesday, Dec. 16, 2008. Deborah and her husband Heath attempted to buy a birthday cake for their son at a near by ShopRite supermarket in Greenwich, N.J. and were told that the store would not inscribe Happy Birthday Adolf Hitler on the cake. The Campbell's also have two daughters, JoyceLynn Aryan Nation and Honszlynn Hinler Jeannie. (AP Photo/Rich Schultz)

A supermarket is defending itself for refusing to a write out 3-year-old Adolf Hitler Campbell’s name on his birthday cake. Deborah Campbell, 25, of nearby Hunterdon County, N.J., said she phoned in her order last week to the Greenwich ShopRite. When she told the bakery department she wanted her son’s name spelled out, she was told to talk to a supervisor, who denied the request.Karen Meleta, a ShopRite spokeswoman, said the store denied similar requests from the Campbells the last two years, including a request for a swastika. “We reserve the right not to print anything on the cake that we deem to be inappropriate,” Meleta said. “We considered this inappropriate.”

The Campbells ultimately got their cake decorated at a Wal-Mart in Pennsylvania, Deborah Campbell said Tuesday.

Good thing for Wal-Mart! But, uh, isn’t Adolf Hitler an odd name, what with the baggage?

Heath Campbell said he named his son after Adolf Hitler because he liked the name and because “no one else in the world would have that name.”

True. And, really, a much better explanation than Levon gave for naming his boy Jesus. (“’cause he likes the name.”)

The Campbells’ two other children are named JoyceLynn Aryan Nation Campbell, who turns 2 in a few months, and Honszlynn Hinler Jeannie Campbell, who will be 1 in April.

Wait a minute . . . I’m sensing a pattern to these names. But before you go jumping to conclusions:

Campbell said he was raised not to avoid people of other races but not to mix with them socially or romantically. But he said he would try to raise his children differently. “Say he grows up and hangs out with black people. That’s fine, I don’t really care,” he said. “That’s his choice.” He said about 12 people attended the birthday party on Sunday, including several children of mixed race. 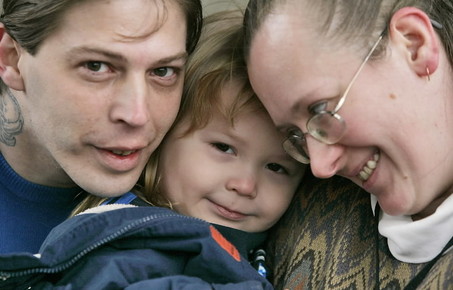