Again with the Golf

“The president didn’t know the NSA was spying on world leaders, but he’s found time for at least 146 rounds of golf.”—the subtitle of a “column” in the WSJ (which is only one of two original sentences in the piece, which is just a series of quotes from news stories).

The issue of the national security/surveillance state that we have created, not to mention the serious problems with the ACA rollout, are worthy of a great deal of discussion.  A reference to golf, a goofy photo (copied below), and a string of quotes, does not constitute “discussion.”  This is just another example of the tumble from seriousness of the WSJ editorial page. 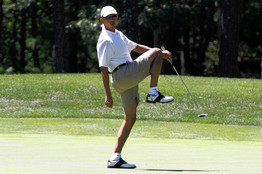 To repeat a thought that has occurred here at OTB from, I think, all of the main authors:  it was silly to make fun of President Bush and his trips to his ranch and it is silly to focus on Obama’s golf (indeed, I would be more than happy to never see a story about presidential vacations/relaxation ever again).  Worse, this is not even analysis or an argument; it is innuendo.  Beyond even that, it is lazy.  If a student turned in an essay made up of quotations and pretended like they summed to an argument, they would get a failing grade.  I expect more from the editorial pages of a major newspaper (although perhaps I shouldn’t).