NYT — Citing A ‘Shamed America,’ Gore Calls For Rumsfeld, Rice, Tenet And 3 Others To Resign [RSS]

Declaring that the Bush administration “shamed America” with its policy on Iraq, former Vice President Al Gore yesterday called for the resignations of six high-ranking officials, including the secretary of defense, Donald H. Rumsfeld; the director of central intelligence, George J. Tenet; and the national security adviser, Condoleezza Rice.

In an hourlong speech to 900 people at New York University that was interrupted by applause more than a dozen times, Mr. Gore also accused President Bush of “utter incompetence” on Iraq, adding that the president had “made the world a far more dangerous place and dramatically increased the threat of terrorism against the United States.”

Mr. Gore’s appearance, which was sponsored by New York University College Democrats, a student organization, and MoveOn.org PAC, an offshoot of an online organization that has run advertisements criticizing the president and his administration, amounted to a broad-gauge attack on the man who defeated Mr. Gore in 2000.

“The president convinced a majority of the country that Saddam Hussein was responsible for attacking us on Sept. 11, when in truth he had nothing whatsoever to do with it,” Mr. Gore said. “The president convinced the country with a mixture of documents that turned out to be forged and blatantly false assertions that Saddam was in league with Al Qaeda.”

Unfortunately, the NYT account doesn’t adequately capture the absolutely deranged tone of Gore’s address. Even the selections chosen by NPR–hardly an unsympathetic venue–of the speech were positively frightening. I don’t know whether the bitterness of his narrow defeat in 2000 finally pushed him over the edge or if this is just the latest iteration of Gore’s never-ending quest for a personality, but I’m thankful this loon isn’t in charge of our nuclear arsenal. 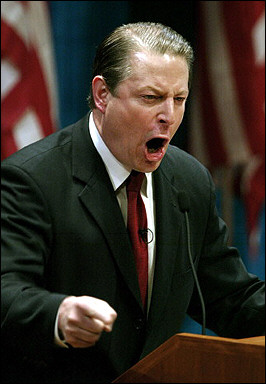 MoveOn has the full transcript of the prepared remarks. Imagine that speech as performed by Jesse Jackon on crack. C-SPAN has the entire 70 minute video feed.

Update: John Podhoretz agrees that “Gore is insane” and calls the speechl “the single craziest political performance of my lifetime.” I nonetheless stand by my position.