WaPo continues its tradition of putting editorials on page A01: Analysis – For Personal Reasons, Or Is He the Fall Guy? (the headline atop the web edition: Is Tenet the Fall Guy for The Bush Administration?)

When three hijacked planes crashed into the World Trade Center and the Pentagon, killing thousands, no one took the fall in the Bush administration.

When the nation went to war in Iraq on the basis of intelligence about weapons of mass destruction that turned out to be wildly wrong, no one took the fall, either.

So when George J. Tenet resigned as CIA director yesterday, it was no surprise that his departure was choreographed to demonstrate he was not being blamed for any of the intelligence failures that occurred on his watch. The administration line was that he was leaving on his own accord to spend time with his family.

But in official Washington, where every departure of any senior official is searched for hidden meaning and ulterior motives, the question lingered yesterday in the corridors of power and over expense-account meals: Was Tenet finally being served up as a sacrificial lamb by an administration that loathes to admit a mistake?

That’s the lede. Other than “George J. Tenet resigned as CIA director yesterday,” none of that is news. And “intelligence about weapons of mass destruction that turned out to be wildly wrong” is merely the working theory, since we’ve uncovered no evidence I’m aware of explaining what happened to Iraq’s vast stockpiles of chemical agents and longstanding nuclear program.

Fueling much of the speculation was the fact that Tenet had sought to leave at several points last year, but President Bush had persuaded him to stay, as administration officials told it. Now, when the White House is under severe political pressure and Bush’s reelection may be imperiled, the president finally accepted Tenet’s resignation.

“To some degree, the White House may be making a craven calculation,” said Flynt Leverett, a former CIA and Bush White House official who is now at the Saban Center for Middle East Policy at the Brookings Institution. “You have calls for accountability, that someone has to lose a job. In a sense, you have an easy way to have someone lose his job — he wants to quit.”

A little harsh for finally accepting the resignation of someone who has repeatedly told you he needs out, no?

The piece does a decent job of rounding up the inside speculation into what happened here, although no better than various roundups in the blogosphere yesterday morning. Regardless, most of this is fodder for the editorial page, not A01.

WaPo also has an interesting photo gallery that’s in the form of a Flash slideshow narrated by Walter Pinkus. 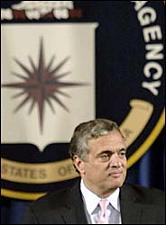 George J. Tenet’s resignation may have been hastened by a critical, 400-page report from the Senate Intelligence Committee that was presented to the Central Intelligence Agency for comment last month.

Government officials and people close to Mr. Tenet said the classified report was a detailed account of mistakes and miscalculations by American intelligence agencies on whether Iraq possessed illicit weapons before the United States invaded last year. An unclassified version of the report is to be made public this month. Some close to Mr. Tenet said the report was among the factors that led him to resign from a post he had considered leaving for several years.

A senior intelligence official said Mr. Tenet had neither read nor been briefed on the Senate report. The official described as “bunk” the idea that his departure had been related to the Senate findings.

Now, this is interesting. The lede is that the report is “among the factors that led him to resign,” even though the next bits of information are that he hasn’t actually seen the report and a denial from an unnamed “senior intelligence official” that the report had anything to do with the departure.

Officials who have read the report described it as presenting a broad indictment of the C.I.A.’s performance on Iraq. They said its criticisms ranged from inadequate prewar collection of intelligence by spies and satellites to a sloppy analysis, often based on uncorroborated sources, that produced the conclusion that Iraq possessed biological and chemical weapons.

“There are some things that are indefensible,” said a recently retired intelligence official who had seen the report. “There are some real errors, of omission and commission, and it’s not going to be a pretty picture.”

A Congressional official declined to comment on the tone of the report or its specific content, but said, “Our intention has been to be as detailed and as thorough as possible, and we’ve been very specific.”

The version of the report that was shown to the C.I.A. included only factual findings. Separate conclusions are still being drafted by Democrats and Republicans on the Republican-controlled panel, government officials said. But the findings alone were portrayed by three officials as likely to be particularly embarrassing to the C.I.A., whose analysts were the main proponents among those from various intelligence agencies of the view that Iraq possessed illicit weapons.

Mr. Tenet and his agency have insisted that it is too soon to say whether the C.I.A. made mistakes in its prewar assessment. But even before Mr. Tenet announced his resignation, the committee chairman, Senator Pat Roberts, Republican of Kansas, said at a meeting on Thursday that he believed intelligence agencies were still “in denial.”

Richard J. Kerr, a former deputy director of central intelligence who has been leading the C.I.A.’s internal review of its performance, said in an interview on Thursday that he had not read the Senate report. But he said he believed that it had been a factor in Mr. Tenet’s decision to resign.

It sounds like the report is going to be tough on the Intelligence Community and that some are in denial. Neither is surprising. But the only information we have so far linking the report to the resignation is the educated guess of some guy who hasn’t read the report or talked to Tenet. Interesting.

George J. Tenet was determined to see Osama bin Laden in American custody. Now, with Mr. Tenet’s resignation as director of central intelligence, the international terrorist has outlasted him.

For a man whose career at the Central Intelligence Agency was defined by the battle against Islamic terrorism, the failure to capture his nemesis can only be a bitter regret. The notion of Mr. bin Laden’s still being on the loose while new groups arise from the wreckage of his organization, Al Qaeda, underscores how much unfinished business remains in the war on terror.

Clearly, capturing Osama would be a propaganda coup. On the other hand, all hands agree that doing so would have no noticable affect on jihadist terrorism or even al Qaeda, given the cellular and organic nature of those movements. Further, saying that he’s leaving before the job is done is rather silly. That could be said of every government official in the history of government officials. One doesn’t disparage a retiring police chief by noting that there are still criminals on the loose.

The judgment of history on Mr. Tenet’s service at the C.I.A., where he was the second-longest-serving director (after Allen Dulles), may ultimately be decided by how the agency, which he helped rebuild after the cold war, continues to wage the fight against terrorism under his successors.

Beginning with his days on the staffs of the Senate Intelligence Committee and the National Security Council, in the late 1980’s and early 90’s, the hallmark of Mr. Tenet’s career was the search for ways to change the intelligence community in order to confront terrorism, the proliferation of weapons of mass destruction and other unconventional threats to the United States.

As deputy director of central intelligence and then as director, he sought to reorient the agency away from its focus on the Soviet Union and toward an emphasis on what he called the new “hard targets,” including Iraq, Iran, North Korea and other states that might use terrorism and unconventional weapons against the West.

His campaign to reorganize the C.I.A. began at a time when, in the 1990’s, morale and resources there were at historic lows, making it all the more difficult for the agency to retrain itself to spy on elusive terrorists rather than Russian intelligence officers. After the collapse of the Soviet Union and the 1994 arrest of the Soviet mole Aldrich H. Ames, the C.I.A. was risk averse and mired in second-guessing. Veteran officers quit the agency in large numbers, while steep budget cuts meant that few were being replaced.

In his early years as director, under President Bill Clinton, Mr. Tenet won praise from C.I.A. employees and former officials for his willingness to defend the agency and push for more money to rebuild its spy service. A back-slapping, morale-boosting boss, he sought to expand and transform the Directorate of Operations, the agency’s clandestine espionage arm, and took special interest in the development of the directorate’s cadre of case officers.

“I think he’s going to be remembered as one of the great leaders of the agency, because he turned it around,” said former Senator Bob Kerrey of Nebraska, a Democrat who served on the Senate Intelligence Committee in the 1990’s. “The morale when he took over was probably at one of its lowest points ever. He is genuinely an intuitive manager, he defended them, he built up a superior agency. The agency is an awful lot better than it was before.”

Which is probably the fair standard by which to judge Tenet. He inherited a broken agency and an inherently flawed intelligence process. He’s done quite a bit to address the former but not much (that I’m aware of, anyway) about the latter.

Interestingly, the major (free) paper that came closest to straight reporting was the LA Times – CIA Director, Under Fire for Agency Lapses, Resigns [otbblog/jamesotb]. While noting that there was all manner of speculation, and quoting some of it, the story doesn’t take a side as to what the more plausible explanation is. As a bonus, they actually include some hard news that I haven’t seen elsewhere:

Jim Pavitt, who leads the CIA’s clandestine service, also will be leaving the agency this summer, a CIA official said. Pavitt has been the deputy director of operations for the last five years. He is a 31-year veteran of the agency who made his decision to retire several weeks ago, the official said.

Tenet is expected to name Pavitt’s successor today. A CIA official said that Tenet had selected Stephen R. Kappes, a former Marine and 23-year agency official who has served as the associate deputy director of operations since June 2002.

Granted, the DDO isn’t a household name, but it’s important news that two of the top three CIA leaders will be leaving soon.

I don’t subscribe to WSJ, so can’t read their story. Their snippet on the front page is:

TENET SAID he would step down as CIA director next month, adding to the turmoil in America’s spy agencies and setting the stage for a broad debate about whether it’s time to change the structure of U.S. intelligence.