The network was quoting its correspondent in Saudi Arabia and gave no further details. Al Qaeda had given the Saudi government a Friday deadline to free jailed militants or it would kill Paul Johnson 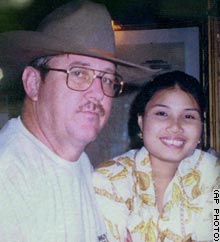 An Arabic TV news network said Friday that American hostage Paul Johnson Jr. has been beheaded by his Saudi captors.

Al Arabiya said its bureau chief had been shown the video of the killing.

A Saudi security source said, “From our end, we cannot confirm this. We have not found a body yet.”

Earlier Friday, Al Arabiya had aired an emotional statement from the wife of Johnson.

Johnson’s wife, Noom, who is Thai, said she hoped the Saudi government “can help my husband.”

U.S. and Saudi investigators concluded an intensive meeting Friday, Saudi officials said, as security forces spread all over the kingdom searching for Johnson.

Johnson, 49, a Lockheed Martin Corp. employee, had been kidnapped Saturday in the Saudi capital of Riyadh. He helped maintain U.S.-built Apache helicopter gunships for the Saudi military.

Johnson’s captors had threatened to kill him by Friday unless the Saudi government released al Qaeda prisoners and Westerners leave the Arabian Peninsula.

Abdel Aziz al-Muqrin, the self-proclaimed military leader of al Qaeda in Saudi Arabia, claimed responsibility for Johnson’s kidnapping and the death of another American on the same day on behalf of a group called the Al Falluja Squadron, which says it has ties to al Qaeda.

“My brother is an honorable man,” she said. “He has always treated people with dignity and respect.”

. . . an Islamist website showed photographs of the apparent beheading.

A site calling itself the Northeast Intelligence Network claims, “We have the images in our possesion but at this time we are not placing them on the website.” (via Jeff Quinton)

UPDATE: Apparently, “at this time” was enough time to code the pictures into HTML. They’re up. (HT: OF Jay)

“In answer to what we promised … to kill the hostage Paul Marshall (Johnson) after the period is over … the infidel got his fair treatment,” the statement said.

“Let him taste something of what Muslims have long tasted from Apache helicopter fire and missiles,” the statement said.

and has a rather grisly photo of the beheaded Johnson atop his site. (HT: Joy Larkin)

UPDATE: He’s taken the photo off the main page but posted three of them here.