The militant group the Army of Ansar al-Sunna says in an Internet statement that it has beheaded a U.S. Marine kidnapped in Iraq and is holding another “infidel” hostage. “We tell your leadership that we beheaded the marine of Lebanese origin Hassoun and you will see the film with your own eyes soon,” said the Arabic-language statement, which was carried on at least two Islamic websites on Saturday.

Arabic television Al Jazeera last Sunday screened a videotape of militants holding a blindfolded Wassef Ali Hassoun with a sword poised over his head. They demanded the release of prisoners in Iraq. It was not immediately possible to verify the authenticity of the statement, which was addressed to U.S. President George W. Bush and advised him to withdraw his troops from Iraq.
“Your soldier had romantic relations with an Arab girl and he was lured away from his base,” the statement said. “And we will soon issue a new tape showing a new infidel hostage,” it said without giving the nationality of the hostage.

The U.S. military has said that Hassoun had been absent from his unit since June 21, but could not confirm he had been abducted.

Given that Hassoun is/was Muslim, it’s unclear why he was an “infidel.” And, since he is/was of Lebanese Arab extraction, why his relations with an Arab girl would be problematic is also unclear.

An Iraqi militant group claimed on a Web site Saturday that it has beheaded a captive U.S. Marine. The group, called the Ansar al-Sunna Army, posted a written statement on an Islamic web site claiming that it had killed Lebanese-born Cpl. Wassef Ali Hassoun. “We would like to inform you that the Marine of Lebanese descent has been killed, and you will soon see the movie with your own eyes,” said the statement, signed in the name of the group’s leader, Abu Abdullah al-Hassan bin Mahmoud. The U.S. military in Baghdad said they were checking into the report of Hassoun’s death but had no comment or confirmation for the moment.

On June 27, pan-Arab satellite station Al-Jazeera broadcast a videotape showing Hassoun blindfolded and militants threatening to kill him unless the United States releases all Iraqis in “occupation jails.” Hassoun, from West Jordan, Utah, was last seen about a week before the videotape was broadcast, the military said.
Ansar al-Sunna Army has perviously claimed responsibility for Feb. 1 suicide attacks on two Kurdish political party offices in Irbil that killed 109 people. At the time, U.S. military officials said it could be an offshoot of the northern Iraq-based militant group Ansar al-Islam.

U.S. forces initially believed Hassoun may have gone missing, but last month’s Al-Jazeera video had led to the military changing his status to “captured.” The New York Times, citing a Marine officer who spoke on the condition of anonymity, has reported on its Web site that Hassoun had been traumatized after seeing one of his sergeants killed by a mortar, and was trying to make his way back to Lebanon. The officer told the paper that Hassoun sought the help of Iraqis on the base, was betrayed by them, and was handed over the extremists.

UPDATE: “Militant” seems to have become the media meme for describing these murderers.

Voice of America — Militant Group Says It Has Beheaded US Marine

While several of the headlines showing on GoogleNews as of 1625 EST didn’t include the word “militant,” all of those headlines avoided description of the murderers entirely. Terrorist, killer, murderer, Islamist, jihadist, and so forth were all bypassed. When even Voice of America–which is supposed to get our message out to the rest of the world–falls prey to moral relativism, we’re in trouble. 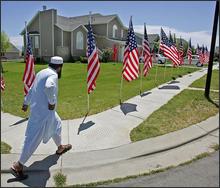 Relatives of U.S. Marine Cpl. Wassef Ali Hassoun were in seclusion Saturday after an Iraqi militant group claimed on a Web site that it had beheaded him.

Mohammed Hassoun, when reached at his home, declined to comment on the claim. West Jordan Police Capt. Gary Cox, who has acted as a spokesman for Hassoun’s family, was seen entering the home about an hour after news of the Web site declaration became public. A representative of the Khadeeja mosque in nearby West Valley City met with family members for about 15 minutes and refused to comment as he left the home, where the yard had been decorated in recent days by about two dozen flags put up by Boy Scouts.

There was no immediate indication that the family would make a statement.