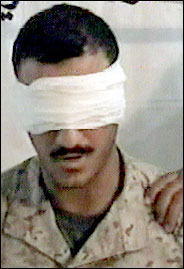 A militant Iraqi group threatened Sunday night to behead an American marine it said it had abducted from a military base unless the United States released all Iraqi prisoners, according to a video broadcast on the Qatar-based television network Al Jazeera. The video shows a man identified as Cpl. Wassef Ali Hassoun sitting on the ground in desert-patterned camouflage fatigues, with a thick blindfold over his eyes and a long, curved sword held over his head. Marine officials said Sunday night that Corporal Hassoun, who is of Lebanese descent, had been missing since June 21.

The kidnappers belong to a little-known group called the Islamic Reaction, which referred to itself as the security wing of the 20th Revolution Regiment. They did not give a deadline for taking action but said Corporal Hassoun would be killed if their demands were not met.

The new beheading threat adds to the anxiety that has been steadily rising in Iraq with the approach of the transfer of sovereignty on Wednesday. Now five men Ã¢€” three Turks and a Pakistani as well as the American Ã¢€” face grisly execution if their countries do not bow to their captors’ demands.

Earlier on Sunday, another Arab television network broadcast a video of masked men holding a Pakistani contractor hostage. The masked men, apparently not from the same group as the one holding Corporal Hassoun, said they would cut off their hostage’s head within 72 hours unless Pakistan closed its embassy in Baghdad and recalled all of its workers. The Pakistani government has not issued a response. In the video, the Pakistani hostage looked ashen-faced and terrified as he sat at the feet of four gunmen. He held up a badge identifying himself as an employee of the American contractor Kellogg Brown & Root.

In the video of the man identified as Corporal Hassoun, no kidnappers are clearly shown, although someone standing off camera is holding a sword over the marine’s head. In a statement by the group, the kidnappers said they had sneaked into an American base, lured Corporal Hassoun out and then kidnapped him.

Marine officials said Corporal Hassoun is a member of the First Marine Expeditionary Force, which has many troops based in the strife-ridden Falluja area, where several other Americans have been abducted. The officials said that while they could confirm that Corporal Hassoun was missing, they could not confirm he had been kidnapped. In the short, grainy video, the camera lingers on his Marine identification card that says, “Hassoun, Wassef Ali” and “Active Duty.”

he family of a Marine taken hostage in Iraq and threatened with beheading has asked people around the world to pray for his safe return.

The family of Cpl. Wassef Ali Hassoun issued a brief statement late Sunday confirming that a hostage held in Iraq was the missing U.S. soldier, who is of Middle Eastern origin.

“In the name of Allah, the merciful, the compassionate, we accept destiny with its good and its bad,” Hassoun family friend and spokesman Tarek Nosseir said outside the family’s home. “We pray and we plead for his safe release and we ask all people of the world to join us in our prayers. May God bless us all.”

In the video, the hostage had a white blindfold covering his eyes. He wore military fatigues, and his mustache was trimmed. The U.S. military said Hassoun was of Lebanese descent.

Arab satellite television network Al-Jazeera broadcast the videotape of Hassoun by a militant group threatening to behead him if the U.S. military did not release all prisoners in Iraq.

The tape displayed a Marine identification card in the name of Wassef Ali Hassoun. The U.S. military said a corporal by that name had been missing from his unit in the 1st Marine Expeditionary Force since June 21.

Arab television broadcast videotape Sunday of two men taken hostage by militants, one described as a U.S. Marine lured from his base and the other a Pakistani driver for an American contractor. Insurgents threatened to behead them both.

As Tacitus notes, the fact that Hassoun is of Arab descent makes him an especially attractive prize for the terrorists, who would view him as a traitor. And he may well be right on this score:

I do have to wonder what the effect will be on his fellow Marines when he is finally executed. Much as I would like think they’ll all maintain an unwavering professionalism in spite of a justified outrage, I can’t help but feel that insurgents facing Marines will see their chances of being taken prisoner drop significantly in coming weeks.

It wouldn’t surprise me at all.

Steven Taylor wonders about the pattern:

Ok, so this means that the terrorists have a US Marine with a Arab-sounding name, a Pakistani and three Turks (both Muslim countries) and they are threatening to behead them all. Perhaps I don’t understand their PR campaign here, but surely beheading Muslims will be somewhat counter-productive. At a minimum it would help demonstrate that this is clearly a war waged by jihadist fanatics against the whole world, including non-jihadist muslims.

That’s exactly right. Remember, they’ve been killing Muslims all along, including a rather brutal campaign in Saudi Arabia. The jihadists hate Muslims who they view as unpious even more than they hate Westerners. Indeed, historically, they have focused their energies against apostate governments (for example, the Sadat assassination). One of the main innovations of bin Laden was the reorientation of the focus to the West first, based on the rationale that apostate Arab governments would fall without the support of the West.

In a video broadcast by Aljazeera on Sunday, the Islamic Retaliation Movement/Armed Resistance Wing said US marine Hassoun Wassef Ali would be beheaded if detainees in US-led occupation prisons were not freed. The group claims to have taken Ali – of Pakistani origin – captive after “infiltrating a US military base in Iraq”. The video received by Aljazeera shows a kneeling, blindfolded, moustached man in camouflage military garb. A hand holding a long sword is seen standing behind Ali.

Ali Hassoun sat chain-smoking Monday in his fourth-floor apartment, waiting for word on his son, a Lebanese-American U.S. Marine threatened with beheading by his captors in Iraq. Another of his sons, Sami, talked with worried relatives, who said contacts were under way with politicians and Muslim clerics in Lebanon and Islamist groups in Iraq to secure the release of Wassef Ali Hassoun. “We are trying to send word through all channels that he is Lebanese, Arab and a Muslim,” Abdullah Hassoun, a member of the extended family and head of Al-Safira municipality, told The Associated Press. “He must be released by his kidnappers,” he said.

I’m afraid those reasons are precisely why he won’t be.

UPDATE (7/3): The terrorists claim to have beheaded Hassoun. No video has yet been released and the report is unconfirmed. See this post for details, updates.