Stacy McCain points me to this story from Alabama, where Jon B. Terry, a 57-year-old defense attorney for Energen Corporation, his filed for a continuance on account of a conflict with the Crimson Tide’s appearance in the BCS National Championship game. The substance of the petition: 1. This case was set for trial several months ago before certain monumental events occurred that were beyond the anticipation of the attorneys and the clients.

2. Since the setting of this case, one of the two great college football teams in this State has reached levels on a national scale that have not been enjoyed by any team in this State in 17 years next preceding the date hereof.

3. Currently, one of the two great teams in this State are playing for a national championship and has enjoyed an undefeated season and clinched the SEC Title Game.

4. Most of the attorneys representing all of the named Defendants have tickets and reservations to be in Pasadena on the 6th day of January, 2010, which date would conflict with the trial date as travel times and schedules for the game overlap the trial as currently set.”

It makes four additional points before concluding with the most salient:

9. ROLL TIDE!! (although my secretary is for the other great team of this State, she feels that I need to attend this championship game!); and may the Longhorns be defeated.

The written response by the opposing counsel is not available but the substance is this:

The plaintiffs in the case were not as taken with the motion for continuance. “This case is a very serious case involving the death of the plaintiff’s mother. The case was filed in 2005, and is ready to be tried. … Simply stated, some things are more important than football.”

Naturally, with such a frivolous objection as the only thing standing in the way of a man getting an opportunity to see his team compete for another national championship, the honorable Dan C. King, presiding — an Auburn graduate, no less — could not in good conscience deny the petition. 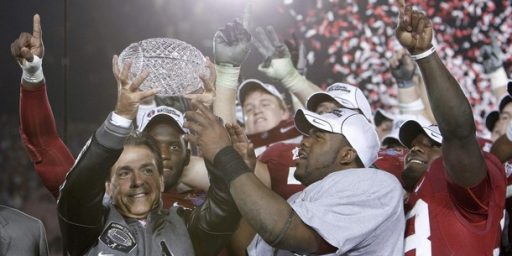