A decades-long decline has ended.

When I saw the NPR headline “With Roe on the precipice, Americans are having more abortions,” I got the impression that there was a rush to clinics to get under the wire. But, no, that’s not the case.

The number of patients seeking abortions in the U.S. rose in 2020, reversing some 30 years of decline in the number of abortions.

That finding, in a report released by the Guttmacher Institute on Wednesday, comes as the Supreme Court appears poised to overturn decades of precedent guaranteeing abortion rights.

The number of abortions recorded by Guttmacher’s Abortion Provider Census rose to 930,160 in 2020, an 8% increase compared with 2017, the last time the data was collected.

“The long-term decline in abortion is over, and the number of abortions in the United States is actually increasing,” said Rachel K. Jones, a research scientist who co-authored an analysis of the data for Guttmacher, a research group that supports abortion rights.

The report lists several potential factors that may have contributed to the increase, including increased abortion access in some states through Medicaid expansion or the growth of abortion funds that help low-income people cover the costs of obtaining an abortion.

The report also notes that the Trump administration’s overhaul of the federal Title X family planning program in 2019 prompted some health centers to withdraw, which resulted in fewer patients receiving contraception through the program.

The increase in abortions took place nationwide, with the largest uptick in the West and Midwest. But at the state level, the numbers varied widely depending on local circumstances. For example, as a growing number of abortion restrictions in Missouri prompted more patients to cross state borders for care, neighboring Illinois — a state with far fewer such laws — saw a 25% increase in abortions between 2017 and 2020.

Given that states have been pushing the envelope of late in anticipation of a more conservative Supreme Court whittling away or eliminating the Constitutional right to abortion announced in Roe, it seems unlikely that the legal regime is the answer. And, while I support making contraception free and easily available, I’m skeptical that programmatic change contributed that much to an 8 percent uptick.

My initial instinct was that the explanation is simply demographic: there are more women of child-bearing age and the study is simply in raw numbers. And, sure enough, that’s happening:

Alas, my hypothesis wouldn’t seem to explain a sudden reversal of a decades-long trend since the adult population has been steadily increasing.

I’ve had no luck finding longitudinal data that’s more refined. There are plenty of over/under 18 studies and ones like this one that lump 18-64 together. Something like 16-30 would be more useful in examining this theory. I’ve found state-level data that breaks it down into smaller subsets but not across time. The closest thing I found was a 2013 AEI blog post projecting that “By 2020 or 2025, the largest age cohorts will all be under 40.”

Both the number of abortions performed and the rate of them increased between 2017 and 2020, according to new research from the Guttmacher Institute, a policy group that supports abortion rights and tracks national and state statistics.

While we would expect the raw number of abortions to increase as the number of women of child-bearing age increases, the fact that the rate went up (albeit modestly) tells us that something else is going on.

The report also clarifies that

This means that, theoretically at least, even the draconian new laws on the books wouldn’t have much impact.

And this conjecture confuses me:

Given that the number and rate is up, I’m not sure what they’re driving at there. 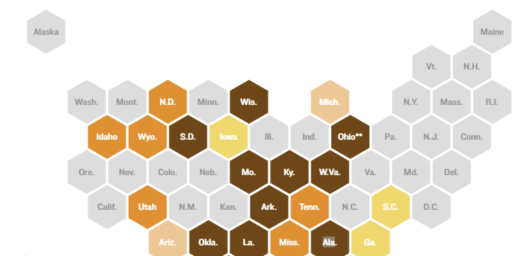