Ann E. Dunwoody has been nominated for a third star and head of Army logistics. This would make her the Army’s top-ranking woman and the first three-star female in five years.

Maj. Gen. Ann E. Dunwoody has been nominated to become the senior logistics officer on the Army Staff. If confirmed for appointment to lieutenant general and assignment as deputy chief of staff, G-4, the Quartermaster Corps officer will be the top-ranking woman in the Army.

Dunwoody is one of 17 women on the Army’s general officer roster — seven major generals, nine brigadier generals and one promotable colonel. If her nomination is confirmed by the Senate, Dunwoody will become the first female soldier to achieve three-star rank since Lt. Gen. Claudia Kennedy, the former deputy chief of staff for intelligence who retired in 2000.

Seventeen female generals is a lot, given that women are not eligible for the combat arms. Indeed, three star rank is historically quite significant, as this excerpt from the Naval Historical Service makes clear:

General Washington was the first to wear three stars when he became the nation’s first Lieutenant General in 1798. After he died in 1799 there was not another Lieutenant General until 1855. The three stars appeared again, however, by 1832 as the insignia of the Major General who commanded the Army. In 1855 Congress honored Winfield Scott for his service as commanding general since 1841 and for his accomplishments in 1847 during the war with Mexico by making him a Brevet Lieutenant General. He held that rank until he retired in 1861. The next Lieutenant General was Ulysses S. Grant in 1864. Two years later he became the first General of the Army of the United States and chose four stars as his rank insignia. When Grant became President in 1869 he appointed William T. Sherman General of the Army and Phillip H. Sheridan Lieutenant General. Sherman changed the rank insignia in 1872 to a gold embroidered coat of arms of the United States between two silver stars. After Sherman retired in 1884 there was not supposed to be another General of the Army but in 1888 Congress relented and permitted the President to promote Sheridan who died two months later. Congress allowed another Lieutenant General promotion in 1895, one in 1900, five between 1903 and 1906, two in 1918 during World War I, one in 1929 and then no more until 1939. Our Army has been supplied with Lieutenant Generals since, as has the Marine Corps since 1942 and the Air Force since 1947.

There were no more full Generals after Sheridan died in 1884 until 1917 when Tasker H. Bliss, the Army Chief of Staff, and John J. Pershing, the commander of the U.S. forces in France during World War I, went from Major General to General (emergency) so they could have ranks equal to the allied commanders with whom they dealt. They changed the rank insignia back to four stars. In 1918, Peyton C. March also became a General.

Congress did not allow the promotion of any more full Generals from 1918 to 1929 when the Major General chosen to be Chief of Staff also became a General so he could have a rank equal to the Chief of Naval Operations. Promotions for other Generals did not come until World War II, with the exception of a permanent promotion to General for Generals Bliss and March in June 1930. The Army still has several Generals, the Marines have had at least one General since 1945 and the Air Force, which started with three in 1947, also has several.

So, there are now seven female generals in the Army alone that have the rank Washington held as commander of the War for Independence. (In 1798, he had already served two terms as president; the third star was entirely ceremonial.)

UPDATE (23 June 2008): Dunwoody has been tapped for a fourth star, the first female so honored. 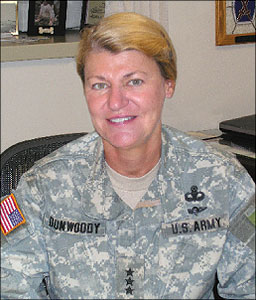