Forty-five years ago today,the world was treated to the first picture of itself from orbit around another planetary body. 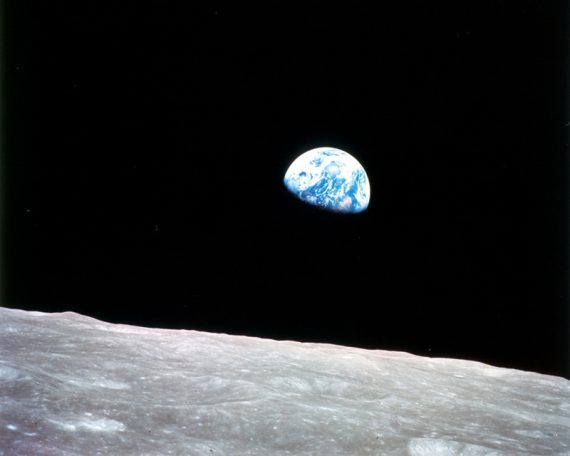 Forty five years ago today, the astronauts of Apollo 8, Frank Borman II, James Lovell Jr, and William Anders, became the first manned spacecraft to leave Earth’s orbit, orbit the Moon, and return home safely. It was, quite obviously, an important moment for the Apollo program that ultimately led to the landing of Apollo 11 on the Moon just seven months later. During the course of that mission, as the three astronauts spent Christmas Eve alone in a spacecraft orbiting Earth’s only natural satellite, they took one of the most stunning photographs in human history, the photo of the Earth rising above the Lunar surface which has come to be known a “Earthrise”. NASA has spent this week marking the occasion:

On Dec. 24, 1968—45 years ago this week—by what is essentially coincidence and fast thinking, one of the most iconic photographs in human history was taken: Earthrise over the Moon.

It occurred during Apollo 8 as astronauts Jim Lovell, Bill Anders, and Frank Borman were orbiting the Moon—the first humans in history to do so. Their orbital motion brought the Earth into view over the Moon’s horizon, moving slowly upward into the black sky. The photographs taken became a symbol of human exploration, and of our fragile and beautiful planet.

The good folks at NASA Goddard Spaceflight Center’s Scientific Visualization Studio took data from the Lunar Reconnaissance Orbiter and carefully matched it to the photographs taken by the Apollo 8 astronauts, allowing them to recreate the events that led to the history-changing moment. They put together a wonderful video,

Wondrous. And the importance of that photo cannot be overstated. Seeing our home world floating by itself, lonely and unprotected, in all that black … it’s been credited for starting the environmental movement, and certainly provides an extraordinary perspective on our place in the Universe.

As it turns out, the Apollo 8 crew almost missed its chance to take the picture, as the video re-creation below explains:

In addition to the video, of course, the Apollo 8 crew was also able to communicate back home with Earth, and used the moment to help create what became a television moment that has become every bit as iconic as the photograph itself:

“We are now approaching lunar sunrise and, for all the people back on Earth, the crew of Apollo 8 has a message that we would like to send to you.
In the beginning God created the heaven and the earth.
And the earth was without form, and void; and darkness was upon the face of the deep.
And the Spirit of God moved upon the face of the waters. And God said, Let there be light: and there was light.
And God saw the light, that it was good: and God divided the light from the darkness.

“And God said, Let the waters under the heavens be gathered together unto one place, and let the dry land appear: and it was so.
And God called the dry land Earth; and the gathering together of the waters called he Seas: and God saw that it was good.
And from the crew of Apollo 8, we close with good night, good luck, a Merry Christmas — and God bless all of you, all of you on the good Earth.”

Finally, here’s a third video comparing the 1968 photograph with one taken in 2007 by a Japanese Lunar observatory: