Absent changes in policy, the nation's most hallowed military cemetery will run out of space in two decades. 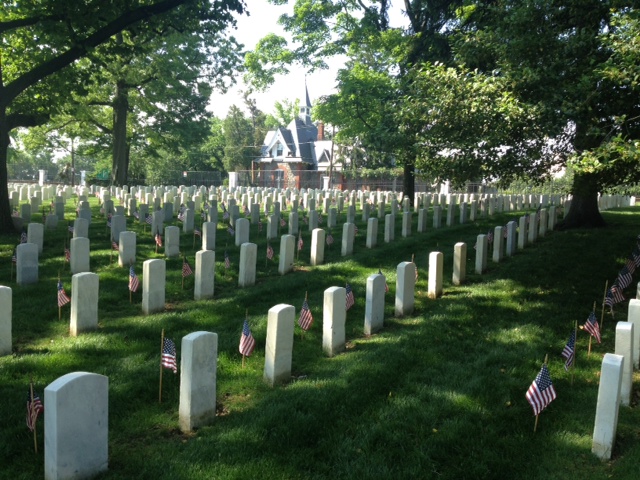 Military officials are considering changing the rules about who is eligible to be buried in Arlington National Cemetery amid concerns that burial space will run out within the next 22 years.

The cemetery will be closed for new interments by 2040 if current policies continue, said the executive director of Army National Military Cemeteries, Karen Durham-Aguilera, at a congressional hearing on Thursday.

“A veteran from the 1991 Gulf War who lives to his or her normal life expectancy will not be able to be interred at Arlington,” Durham-Aguilera said.

With limited extra space available in the D.C. metropolitan area, the best solution is to tighten rules about who is eligible for burial, Durham-Aguilera said.

The Army’s testimony acknowledged the emotional impact of barring some service members from being buried at Arlington, which is the final resting place of more than 400,000 Americans. But with 150 funeral services every week and 3.3 million visitors every year, the pacing is stretching staff and land resources, Durham-Aguilera said.

Necessary changes include restricting eligibility to retired veterans or service members who receive a Silver Star or above, were wounded, killed in action or otherwise died while serving on active duty, Durham-Aguilera testified.

Currently, most military members who served at least one day of active duty or anyone eligible for retirement pay, plus their spouses, children or dependent adult children, are eligible.

The public is overwhelmingly supportive of Arlington National Cemetery continuing to actively bury former service members, according to a survey of 28,000 people conducted by cemetery leadership.

The survey polled opinions on whether different groups should be eligible.

Overall, 91 percent of people support those with Medals of Honor or who were killed in action to remain eligible.

About 75 percent surveyed responded that prisoners of war and those with valor awards or Purple Hearts should also be included, which would extend the active life of the current cemetery grounds to 2200.

About 35 percent of people reported that military retirees should be eligible.

“In the end, the men and women who served this national honorably, as well as their family members, deserve to be laid to rest in hallowed ground,” he wrote in congressional testimony.

Under current policy, the list of people who are eligible for burial at the nation’s most hallowed military cemetery is detailed in a regulation adopted by the Department of Defense, and is actually surprisingly extensive:

• Any active duty member of the Armed Forces (except those members serving on active duty for training only).

• Any veteran who is retired from active military service with the Armed Forces.

• Any veteran who is retired from the Reserves is eligible upon reaching age 60 and drawing retired pay; and who served a period of active duty (other than for training).

• Any former member of the Armed Forces separated honorably prior to Oct. 1, 1949, for medical reasons and who was rated at 30 percent or greater disabled effective on the day of discharge.

• Any former member of the Armed Forces who served on active duty (other than for training) and who held any of the following positions:

• An elective office of the U.S. government.

• The spouse, widow or widower, minor child, or permanently dependent child, and certain unmarried adult children of any of the above eligible veterans.

• Provided certain conditions are met, a former member of the Armed Forces may be buried in the same grave with a close relative who is already buried and is the primary eligible.

• Additionally the cremated remains of an honorably discharged veteran may be placed in the columbarium.

To be honest, in reading the regulation linked above and other information regarding eligibility for internment at Arlington I came away as quite surprised. Like many Americans I suspect, I had long believed that internment was significantly more limited and meant to include persons who were killed in action, who had earned high honors such as the Medal of Honor, the Silver Star, or the Bronze Star, who had served with distinction in some other respect, or who had served in a high position in government such as Presidents and some members of Congress (see i.e., Robert F. Kennedy and former Senator Ted Kennedy). Instead, it would appear that nearly anyone who had served in the military and been honorably discharged is potentially eligible to be buried at Arlington even if they never served in combat. Potentially, this could have meant that my Dad would have been eligible to request burial at Arlington even though his five or so years in the Air Force involved serving on bases in the United States and, for a time, in Libya, during the late 1950s and early 60s, although this was never an option that our family never seriously considered.

On paper at least, it seems clear that there is room to pare down this list so that Arlington can continue to inter veterans and those killed in action for a much longer period than currently contemplated. One way to do that would be to strictly limit eligibility to highly decorated veterans, such as recipients of the Medal of Honor, the Silver Star, the Bronze Star, and other similar awards for bravery above and beyond the call of duty as well as those actually killed in action during a combat situation. Other potentially eligible persons could be former Presidents, members of the Supreme Court, and members of Congress who served in the military prior to being elected to office. Additionally, the Federal Government could consider opening new military cemeteries around the country that would be open to a broader segment of former service members. One example of this can be found in the National Memorial Cemetery of the Pacific, which is located in Hawaii. Yet another option would be to add more space to mausoleums at Arlington for the internment of cremated remains. A final option would be for the Army to acquire more land adjacent to the cemetery to allow for expansion, an option that is apparently being considered. At the very least, though, it seems as though there is some good reason to tighten up the criteria for eligibility for internment at Arlington, especially given the fact that there are hundreds of thousands of combat and non-combat veterans from the Vietnam War Era forward who will be nearing the end of the lives in the future. Absent such changes or new land acquisitions, though, it’s clear that space will run out in Arlington sooner rather than later. We ought to consider tightening the standards just a bit to make sure that date is as far in the future as possible.