Claiming it was because of the weather President Trump chose to skip a visit to a cemetery at the site of one of the bloodiest battles involving Americans in World War One. 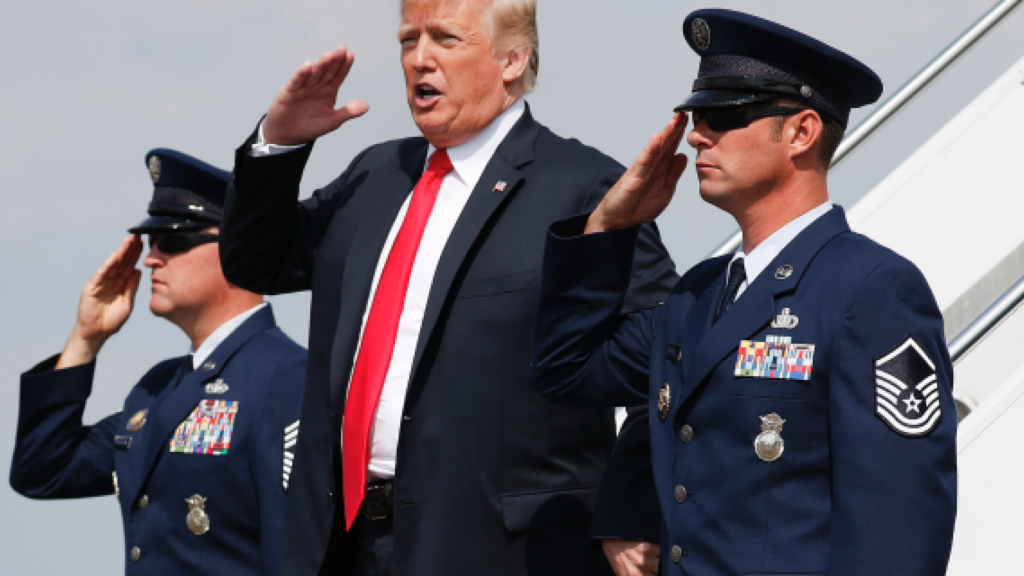 President Trump is in Paris this weekend along with the leaders of nearly 100 other nations marking the 100th anniversary of the end of World War One, which marked the end of what was, at the time, the bloodiest war in world history and one that still leaves scars on the land in France, where the majority of the war was fought. As one might expect, Trump managed to bring controversy with him thanks both to his Tweets and his actions, including the decision to skip a visit to a cemetery located near one of the bloodiest of the war’s battles that the United States was involved in:

PARIS — President Donald Trump canceled a planned visit Saturday to a cemetery for Americans killed in World War I, the White House citing bad weather that grounded his helicopter.

Trump had been scheduled to lay a wreath and observe a moment of silence at the Aisne-Marne American Cemetery and Memorial, located adjacent to Belleau Wood and about 60 miles (100 kilometers) northeast of Paris.

Instead, Trump spent much of the day following a meeting and lunch with French President Emmanuel Macron at the U.S. ambassador’s residence, where he was staying during events to commemorate the 100th anniversary of the end of World War I.

Attending in Trump’s place were the White House chief of staff, retired Marine Gen. John Kelly; the chairman of the Joint Chiefs of Staff, Marine Gen. Joe Dunford; and several members of the White House staff. The Battle of Belleau Wood was a critical conflict in the war and a pivotal encounter in Marine Corps history.

The Secret Service determines when it’s safe to fly Marine One, the president’s helicopter. Paris was covered in clouds with drizzling rain through most of Saturday.

Trump was scheduled to join dozens of world leaders Sunday at a ceremony in the shadow of the Arc de Triomphe marking Armistice Day. He was to deliver remarks at the Suresnes American Cemetery and Memorial, located five miles west of Paris, before returning to Washington.

The cancellation of Saturday’s visit drew criticism from those who say the president should have found a way to travel to Aisne-Marne regardless of the weather.

One of the sharpest criticisms comes from Max Boot:

On Saturday afternoon, the president was scheduled to attend a ceremony at the Aisne-Marne American Cemetery, where 2,289 U.S. soldiers are buried — a small part of the 116,000 Americans who gave the last full measure of devotion during World War I. It was the sort of solemn occasion that U.S. presidents have considered an integral part of their duty at least since the Gettysburg Address. But Trump couldn’t be bothered.

The White House explained that bad weather grounded the helicopters that Trump and his entourage were planning to take. Yet somehow bad weather did not prevent French President Emmanuel Macron, German Chancellor Angela Merkel or Canadian Prime Minister Justin Trudeau from attending outdoor ceremonies commemorating the end of World War I that afternoon. Somehow bad weather did not stop Gen. Joseph F. Dunford Jr., the chairman of the Joint Chiefs of Staff, and retired general John F. Kelly, the White House chief of staff, from attending the very ceremony that Trump could not make.

Rather than make the hour-long drive (Aisne-Marne is only 55 miles from Paris), the low-energy president remained behind at the U.S. ambassador’s residence. It’s not as if he didn’t sacrifice anything, however. Odds are that his room didn’t have Fox News. So he was probably reduced to watching CNN all afternoon. If the New York dating scene was Trump’s personal Vietnam, this was his personal Verdun.

The irony is that Trump prides himself on being pro-military. When asked this week to comment on Michelle Obama’s new memoir, in which she wrote that she could never forgive him for spreading the “crazy and mean-spirited” birtherism conspiracy theory, he replied that he could never forgive President Barack Obama for “what he did to our United States military.” And what did Barack Obama do that was so awful? He spent a little less for defense than Trump is.

So much for Trump’s conceit that he is pro-military. It has about as much factual foundation as his claim not to know his newly appointed acting attorney general. He has no understanding of what soldiers do or the honor code by which they live. His idea of military service is marching in a parade — and he is peeved he couldn’t have one in Washington this Veterans Day. Through his words and deeds, the commander in chief shows his contempt for the men and women in uniform.

Boot isn’t the only person on the right criticizing the President:

“It’s incredible that a president would travel to France for this significant anniversary — and then remain in his hotel room watching TV rather than pay in person his respects to the Americans who gave their lives in France for the victory gained 100 years ago tomorrow,” David Frum, who served as a speechwriter to President George W. Bush, wrote in tweets. Trump is actually staying at the U.S. ambassador’s residence in Paris.

So began a weekend in which Trump — battling on a number of political fronts in Washington — seemed distracted and disengaged. Trump left Washington as the list of White House worries piled up: newly empowered Democrats, criticism of his pick for acting attorney general and backlash over his personal attacks against journalists.

Trump was in France in body but appeared unenthusiastic in spirit.

The White House said Chief of Staff John F. Kelly and Gen. Joseph F. Dunford Jr., chairman of the joint chiefs of staff, would attend the Belleau ceremony in the Trumps’ absence, but Frum suggested Trump could have tried to scramble a motorcade to keep his schedule.

Ben Rhodes, the deputy national security adviser under President Barack Obama, noted he helped plan Obama’s foreign travel throughout his two terms and said it was common to have a backup plan to deal with inclement weather.

“There is always a rain option. Always,” he wrote in a tweet. “Trump will use the U.S. military for a pre election political stunt but sits in his hotel instead of honoring those who fought and died for America.”

The cemetery has 2,288 grave­sites honoring those who died, including many Americans. The names of 1,060 more Americans who went missing and whose bodies were not recovered are engraved on the walls of the site.

The visit to the cemetery isn’t the only event that the President chose to skip this weekend. This morning, as the world leaders gathered to mark the moment at which World War One ended — the 11th hour of the 11th day of the 11th month — Trump was only one of two world leaders not to participate in a dramatic walk down the Champs Elysée up to the tomb of the French unknown soldier at the Arc de Triomphe. This walk was meant to be a symbolic representation of the commitment to world peace and international cooperation that French President Emmanuel Macron sought to emphasize to mark the commemoration of a war that has, slowly but surely, slipped from world memory as the veterans of that war has passed on. There were only two world leaders who didn’t participate in this walk; President Trump and Russian President Vladimir Putin.

Trump will also be skipping a three-day summit that the French President scheduled to coincide with the anniversary commemoration, but that isn’t too surprising since one of the major themes of the conference is intended to discuss the manner in which international cooperation can help avoid the kind of misunderstandings and mistakes that nationalism can lead to, something that World War One stands as an excellent example of. President Trump, of course, became famous, or infamous, during the run-up to the midterm elections by declaring himself to be a “nationalist,” although it is not at all apparent that he has even the slightest understanding of what this means in the context of history or how it sounds to Europeans who paid huge prices in massive wars in both the 19th and 20th Centuries due to what can arguably be called hyper-nationalism. It’s unclear if any representatives from the United States will be participating in this forum in Trump’s place.

Dozens of world leaders are gathered at the Arc de Triomphe in Paris to mark 100 years since the end of the First World War. #ArmisticeDay100 #RemembranceSunday2018

It is true that the security concerns surrounding an American President are far different from those that surround any other world leader, or any of the members of the White House Staff such as those who made the journey to the Aisne-Marne cemetery. Additionally, it is true that flying via helicopter is safer and far less disruptive to surrounding areas than traveling via motorcade would have been. That being said, though, it is also true that had the President insisted on making the visit then the Secret Service and local security forces would have found a way to make it happen. That, after all, is their job. Additionally, with world leaders from France, Germany, the United Kingdom, and other nations already attending the ceremonies at the cemetery, the idea there would not have been sufficient security had the President traveled by motorcade just doesn’t come across as credible.  Taking that into account, Trump’s decision to skip the visit does come across as callous and an example of bad optics. This is more so the case given that the Battle of Belleau Wood is seen as one of the pivotal battles of the final year of the war, and a particularly important battle in the history of the United States Marine Corps, which happened to be marking the 243rd anniversary of its founding in 1775 yesterday.

Perhaps the more notable fact is the hypocrisy that things like this revealed. If former President Obama, or a hypothetical President Hillary Clinton, chosen to skip a visit to a major American military cemetery or a gathering of world leaders in the name of world peace, there can be no doubt what the fever swamps of the far right would have to say about it. As it is, those people repeated what President Trump said on Friday when he blamed former President Obama for “eviscerating” the American military notwithstanding the fact that it is rather obvious that the opposite is true. If a Democratic President had done what Trump did, or not done what he didn’t do as the case may be, the rhetoric directed against them would have been swift and severe. In Trump’s case, there’s nothing but crickets from the pro-Trump right. 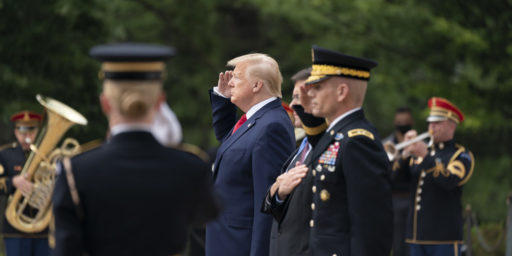