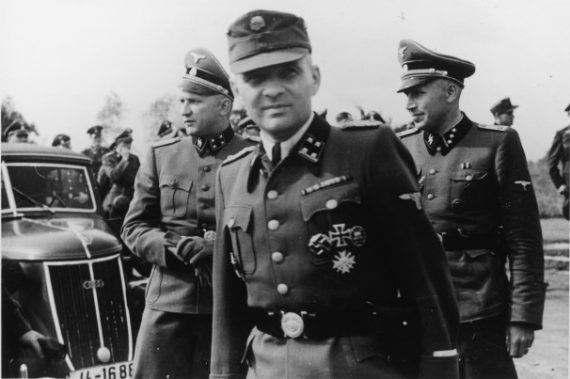 Brigitte Höss lives quietly on a leafy side street in Northern Virginia. She is retired now, having worked in a Washington fashion salon for more than 30 years. She recently was diagnosed with cancer and spends much of her days dealing with the medical consequences.

Brigitte also has a secret that not even her grandchildren know. Her father was Rudolf Höss, the Kommandant of Auschwitz.

It was Rudolf Höss who designed and built Auschwitz from an old army barracks in Poland to a killing machine capable of murdering 2,000 people an hour. By the end of the war, 1.1 million Jews had been killed in the camp, along with 20,000 gypsies and tens of thousands of Polish and Russian political prisoners. As such, Brigitte’s father was one of the biggest mass murderers in history.

Brigitte had an extraordinary childhood, moving from the farm to one concentration camp after another as her father scaled the ranks of the SS: Dachau from ages 1 through 5; Sachsenhausen from 5 to 7; and from 7 to 11, in perhaps the most notorious death camp, Auschwitz.

From 1940 to 1944, the Höss family lived in a two-story gray stucco villa on the edge of Auschwitz — so close you could see the prisoner blocks and old crematorium from the upstairs window. Brigitte’s mother described the place as “paradise”: They had cooks, nannies, gardeners, chauffeurs, seamstresses, haircutters and cleaners, some of whom were prisoners.

The family decorated their home with furniture and artwork stolen from prisoners as they were selected for the gas chambers. It was a life of luxury taking place only a few short steps from horror and torment. Most Sundays the kommandant drove the children to see the horses in the stables. They loved to visit the kennels to pet the German shepherds.

In April 1945, as the end of the war appeared in sight, Rudolf Höss and his family fled north. They split up. His wife took the children and found refuge above an old sugar factory in St. Michaelisdonn, a village near the coast. The kommandant took on the identity of a laborer and hid on a farm four miles from the Danish border. The Höss family waited for the right moment to escape to South America.

She is more willing to talk about when the British captured her father. One cold evening in March 1946, Hanns Alexander, my great-uncle — a German-born Jew but by then a British captain — banged on the family’s door.

“I remember when they came to our house to ask questions,” she says, her voice tight. “I was sitting on the table with my sister. I was about 13 years old. The British soldiers were screaming: ‘Where is your father? Where is your father?’ over and over again. I got a very bad headache. I went outside and cried under a tree. I made myself calm down. I made myself stop crying, and my headache went away. But I have had migraines for years after that. These migraines stopped a few years ago, but since I received your letter, they have started again.”

The story continues. “My older brother Klaus was taken with my mother. He was beaten badly by the British. My mother heard him scream in pain from the room next door. Just like any mother, she wanted to protect her son, so she told them where my father was.”

Alexander assembled a team and headed to the barn in the night. Höss was awakened. He denied he was the kommandant. Certain he had his man, Alexander demanded to see his wedding ring. When Höss claimed it was stuck, Alexander threatened to cut his finger off until the kommandant passed the ring over. Inside was inscribed “Rudolf” and “Hedwig.”

The kommandant was the first person at such a senior level to admit the extent of the slaughter at Auschwitz. He was handed over to the Americans, who made him testify at Nuremberg. Then Höss was passed to the Poles, who prosecuted him, then hanged him on a gallows next to the Auschwitz crematorium.

Perhaps the most amazing part of the tale:

In 1972 they moved to Washington. Brigitte’s husband took a senior job with a transportation company, and they bought a house in Georgetown. It was a chance for Brigitte to start over.

Brigitte struggled — she didn’t know how to write a check, spoke little English and was without friends or family. After some searching, she found a part-time job in a fashion boutique.

One day a short Jewish lady visited the boutique. She liked Brigitte’s style and asked her to come work in her fashion salon in the District.

Soon after she was hired, Brigitte says, she got drunk with her manager and confessed that her father was Rudolf Höss. The manager told the store’s owner. The owner told Brigitte that she could stay, that she had not committed any crime herself. What Brigitte did not know, at least not until later, was that the store owner and her husband were Jewish and had fled Nazi Germany after the Kristallnacht attacks of 1938.

Brigitte was thankful for being seen as a person, rather than her father’s daughter. She worked at the store for 35 years, serving prominent Washingtonians, including the wives of senators and congressmen.

The store owner returned Brigitte’s loyalty and hard work by keeping her secret. With the exception of one other manager, none of the other staff knew the truth about Brigitte’s family history.

“And your father, how do you remember him?” I ask.

“He was the nicest man in the world,” she says. “He was very good to us.” She remembers them eating together, playing in the garden, and reading the story of Hansel and Gretel.

Brigitte is convinced that her father was a sensitive man and had guessed that he was involved with something bad. “I’m sure he was sad inside,” she recalls. “It is just a feeling. The way he was at home, the way he was with us, sometimes he looked sad when he came back from work.”

Brigitte struggles to reconcile her father’s dual nature. “There must have been two sides to him. The one that I knew and then another. …”

Sometime afterward, I call the son of the salon owner. He tells me that the reason his mother had stopped calling Brigitte was that she had simply grown too old to make the calls. “My family holds Brigitte as close as we always have,” he says.

When I ask him why his parents had decided to employ her all those years ago, despite knowing that her father had been a senior member of the Nazi leadership that had driven their own family out of Germany, he told me that it was because of “humanity.”