The Navy's Blue Angels demonstration team has canceled the rest of its 2013 season in response to budget cuts. 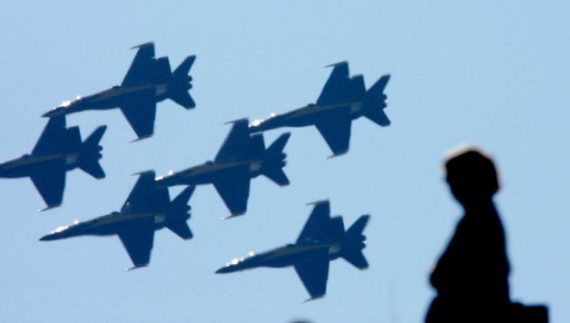 The Navy’s Blue Angels demonstration team has canceled the rest of its 2013 season in response to budget cuts.

The U.S. Navy’s Blue Angels says the rest of its season is canceled because of federal budget cuts.

The aerobatic team’s lead pilot and team commander Tom Frosch made the announcement Tuesday at the team’s headquarters. He says it is the first time since the Korean War that the team would not make the air show rounds.

The Defense Department is facing rather substantial cuts, at least in the Washington sense of getting a smaller increase than they’d hoped for. Certainly, spending that doesn’t contribute one lick to the national defense ought to be first on the list. Demonstration teams, bands, and other public facing programs that contribute tangentially to recruiting but have no bearing on either killing the enemy or sustaining those who do are an obvious choice. The Blue Angels alone cost us $35 million a year. A drop in the bucket, to be sure, but still a lot of money.

There are, naturally, second order effects:

The San Francisco Chronicle reports that the cancellation means the team won’t be flying over San Francisco during this fall’s Fleet Week, and the future of the city’s annual Fleet Week could be in doubt with the air show canceled.

Certainly, the Republic shall endure. It makes no sense to spend $35 million a year to make local air shows attractive events. Fleet Week isn’t until October, so there may be time to find a Plan B (they used Canada’s Snowbird team back in 2004). But lesser-known events that are closer to launch may be scuttled, costing localities and organizers their sunk costs.