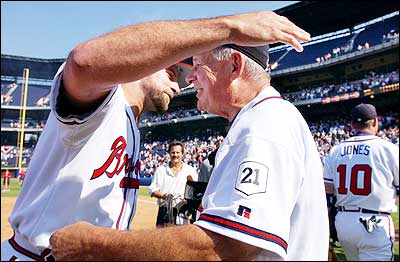 Instead of just handshakes, there were hugs. This wasn’t just another victory. Not for manager Bobby Cox. Not for his players. Not for Braves fans. After the final out was recorded of his milestone 2,000th win, Cox was embraced by his players on the field, then serenaded by a rousing chant of “Bobby! Bobby! Bobby!” from the crowd of 22,000 at Turner Field. Cox is a master at deflecting attention from himself. Wednesday, he couldn’t pull it off. “It’s his day,” Braves pitcher John Smoltz said. “This is for all the times he has passed the credit to us and away from himself.”

A successful one, too. The Braves’ 13 consecutive division titles is a pro sports record.

“We all know where he is going to end up,” said Smoltz, referring to the Baseball Hall of Fame. The emotion of his milestone hit Cox when he was hugged by coach Terry Pendleton in the dugout, then met by his rejoicing players in the infield. Smoltz, who was acquired from Detroit by Cox in a 1987 trade, not only gave his manager an embrace, but the ball with which the last out of the 6-3 victory over the New York Mets was recorded. “It was heartwarming,” Cox said. “I thought we’d shake hands and get off the field like always.” “I think it shows the love we all have for Bobby,” said Pendleton, who was National League MVP when the Braves started their run of division titles in 1991. “It’s not just for Bobby the manager, but Bobby the human being.” “We know he is going to shake it off and not want the attention,” he said. “But we just wanted to show him how much we appreciate him.” As Cox returned to the dugout, he waved his hat to the cheering fans and allowed himself a big smile. “I honestly didn’t expect anything,” Cox said when asked about the ovation. “It was really terrific.” 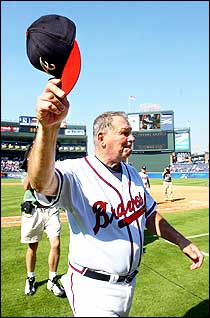 “I’m so happy I could be here to see him do it,” said longtime Braves fan Sarah Jane Wollison of Atlanta. “He doesn’t get the credit he deserves. People say he’s only won one World Series. But look how many games the Braves have won during the season. I remember when the Braves lost all the time.” So does Cox. He was fired as Braves manager in 1981 after four seasons, although owner Ted Turner later called it the dumbest move the team ever made. Fortunately, the Braves brought Cox back, first as general manager in 1986 and then manager in 1990. “I’ve been fortunate to be in the right place at the right time,” Cox said. “In baseball, you can never look too far ahead. With a manager, your job is always day-to-day.”

Cox’s first stint with the Braves began in 1978 at age 36. He says he can’t recall who his first victory came against. “I was probably too excited to remember it,” Cox said. Braves second baseman Marcus Giles was born in 1978. “It’s great to just be part of this,” he said. “What Bobby has done is unbelievable.”

Quite so. It’s certainly true that he has had more than his share of talented players over much of this go-round with the Braves, including at least three pitchers who will likely wind up in the Hall of Fame with him in Tom Glavine, Greg Maddux, and John Smoltz. But there have been a lot of managers who can’t juggle the egos of star players and watch their teams fall apart around them. That includes some pretty good managers, including the last few with the New York Mets. Cox has also led some teams that didn’t have the talent on paper, including this year’s squad, to division titles. 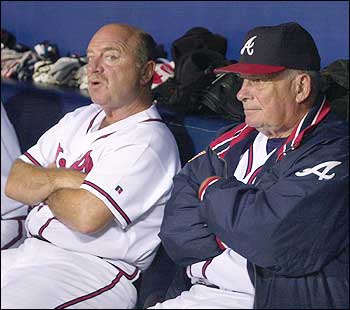 You don’t become Major League Baseball’s winningest franchise since 1991 without a little help. Pitching coach Leo Mazzone (left) and Cox have been trading game strategy since the start of the Braves’ amazing run, continuing to nurture an ever-changing roster this season as well. (AP-AJC) 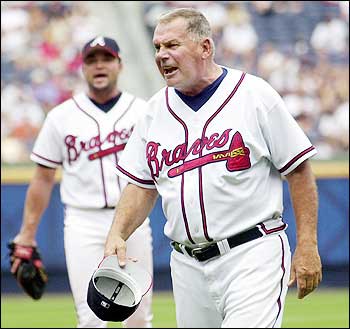