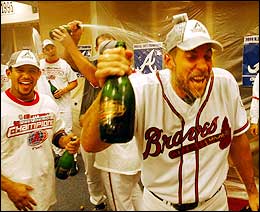 When they were finally able to scream and smile and squirt champagne all over each other Friday night, winning their franchise’s 13th consecutive division title didn’t feel as good as some Braves veterans thought it would. It felt better.

Marcus Giles capped a stirring three-run rally in the eighth inning with a two-out single, driving in the tying and winning runs in an 8-7 victory over the Florida Marlins that brought a more spirited celebration than usual from the Braves. “Right now it’s off the charts,” said closer John Smoltz, who induced a double-play grounder for the final outs and his 41st save. “I should be old-hat at this by now, but it feels brand new, to be honest with you. I’m very happy for this team.”

One would never have known this clinching thing is an annual exercise for them. The NL East still belongs to them, and they’ll cherish it more than they have in some time.
“For me, every year you go out and win the division is amazing,” said center fielder Andruw Jones, who hit a home run in the second inning and a single to help load the bases in the eighth. “This year is a great year because a lot of people doubted us when we left camp, saying we were going to be in fourth place. “There was a lot of talk that this year the Braves were not going to do it. We proved ourselves again, and now we’re celebrating.”

After saying last week that his 11th division title with the Braves would be the best since his first one, Chipper Jones said the feeling late Friday was everything he expected and more. “Definitely,” he said. “It feels better, with the way we did it. If we had won 10-0, it wouldn’t have matched the way this team has gotten things done all year. It’s only fitting that it happened the way it did.”

Just when it appeared the Braves would keep their champagne on ice another night, and Russ Ortiz (2 1/3 innings, five runs) would have to stew over another poor start, they rallied in the eighth against overpowering relievers Guillermo Mota and Armando Benitez. “This is nice, but it’s only part of our goal,” said Giles, whose opposite-field single to right drove in Andruw Jones and Charles Thomas, who had stolen second base when Benitez didn’t keep him close enough. “Our main goal is to have three more champagne parties [through the World Series], and I won’t be satisfied until then.”

“It feels better than I thought it was going to feel,” said general manager John Schuerholz, dapper as always but soaked in champagne and beer. “Because it’s a new bunch of guys. Old guys, young guys, guys brought in from all over the world. “It’s thrilling. I’m glad for the guys. It’s not the same old, familiar guys. There’s a bunch of guys celebrating in there like it’s the first time, and for a lot of them it is.”

Now they need four wins in their final eight games to make Bobby Cox the ninth manager in history to record 2,000 wins, another goal that’s high on the players’ lists.

The Braves overcame another alarmingly poor start by Ortiz, whose past nine starts have yielded one win, a 7.32 ERA and 16 home runs. He has worked less than six innings six times in that stretch. But the Braves had his back Friday. “That’s the thing about this team — it’s an actual team, where everybody pitches in,” Ortiz said. “Everybody has picked each other up.”

Nothing can match the worst-to-first season of 1991, but these ’04 Braves also proved the doubters wrong. In Atlanta, there is nothing unlucky about 13. It’s a very, very good number when it comes to consecutive baseball division titles. “What this team has done is an amazing feat,” Braves general manager John Schuerholz said. The Braves clinched the National League East title Friday night dramatically by beating the defending World Series champion Florida Marlins 8-7 to the delight of 28,632 at Turner Field. “What a great way to close out an improbable season,” Braves third baseman Chipper Jones said after embracing pitcher John Smoltz at the end of the game. “In some ways, it’s as good as the first time,” said Smoltz, the only remaining Braves player from 1991. “I think everyone had a little doubt.”

Picked in the spring to finish second or maybe even third, the Braves instead kept their record streak of titles alive. Forget a reduced payroll. Forget having to replace Gary Sheffield, Greg Maddux and Javy Lopez, who all signed elsewhere as free agents. Forget the grave spring predictions, the embarrassment of May and the losing record through early July.

The Braves can’t be matched Ã¢€” at least over the long haul of the regular season. “No way I thought they’d do it again,” said fan David Foster, who makes one trip a season from Kannapolis, N.C., to see the Braves. “I figured they were dead. It’s amazing what they’ve done and I get to be here to celebrate. It’s unbelieveable.” “I never gave up on them,” said season-ticket holder Ilene Schroeder of Atlanta, who wore her graying 1995 “World Champs!” T-shirt to bring the Braves good luck. “But I wasn’t sure they could do it again.”

ESPN has an interesting interactive graphic feature which shows the incredible turnover in personnel during this run, which began in 1991. Indeed, the only player remaining from that team is John Smoltz–and even he has gone from being an ace #1 pitcher to being one of the premier closers in the game. And, of course, Bobby Cox has been the manager throughout the run. 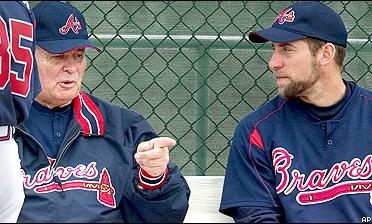 AJC has a photo gallery here.

St. Louis has to be the overwhelming favorite to win the NL pennant. Still, this year will be the first in a long while when “only” winning the division won’t be a disappointment. 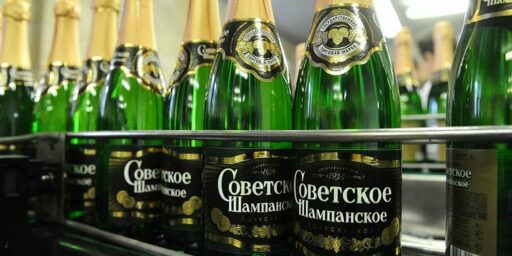