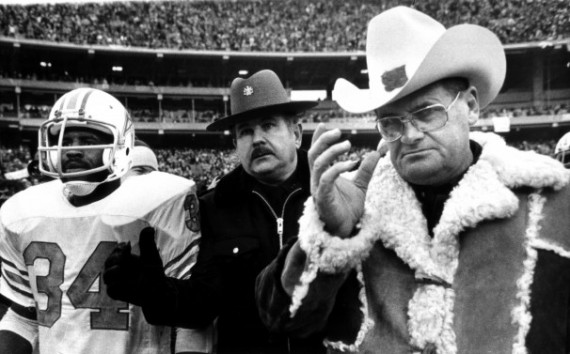 Bum Phillips, the folksy Texas football icon who coached the Houston Oilers during their Luv Ya Blue heyday and also led the New Orleans Saints, died Friday. He was 90.

Bum is gone to Heaven-loved and will be missed by all -great Dad,Coach, and Christian

Phillips died at his ranch in Goliad.

Born Oail Andrew Phillips Jr. in 1923 in Orange, Phillips was a Texas original in his blue jeans, boots and trademark white Stetson — except at the Astrodome or any other dome stadium because he was taught it was disrespectful to wear a hat indoors.

Phillips loved the Oilers and when coaching the team in the 1970s, he famously said of the Cowboys: “They may be ‘America’s Team,’ but we’re Texas’ team.”

He took over as coach of the Oilers in 1975 and led Houston to two AFC Championship games before he was fired in 1980. He was responsible for drafting Heisman Trophy winner Earl Campbell, the player who was largely credited with the success of the franchise.

It was a time marked by a frenzied fan base that filled the Astrodome to root for the Oilers and wave their blue and white pompons during games.

Houston lost to Pittsburgh 34-5 in the AFC Championship Game in Campbell’s rookie year. The Oilers returned to the game the following season only to be beaten again by the Steelers, this time 27-13.

The Oilers went 11-5 in 1980 but lost to Oakland in the AFC wild-card round, and Phillips was fired.

“Football is a game of failure,” Phillips was quoted as saying. “You fail all the time, but you aren’t a failure until you start blaming someone else.”

He left Texas to coach the Saints in 1981 and didn’t have a winning record in his time there and retired in 1985.

Phillips played football at Lamar Junior College before joining the Marines during World War II. After the war he went to Stephen F. Austin where he played two more football seasons before graduating with a degree in education in 1949.

He spent about two decades coaching in high schools and colleges mostly in Texas — he assisted the likes of Bear Bryant at Texas A&M, Bill Yeoman at Houston, and Hayden Fry at SMU — before making the jump to the AFL in 1967 as an assistant under Sid Gillman with the San Diego Chargers. Phillips came to Houston in 1974 as Gillman’s defensive coordinator and became coach and general manager when Gillman resigned after that season.

My family moved to El Paso from Germany in 1979 and I became an NFL fan that fall, watching pretty much every game played by the Dallas Cowboys and Houston Oilers. While Tom Landry and the Cowboys were always my favorite team, it was hard not to like Bum Phillips and Earl Campbell. We moved to Alabama in October 1980 and I continued to keep up with both teams as well as possible—this was long before NFL Sunday Ticket and half a dozen games broadcast on various channels, so it was harder to follow out-of-market teams—but I quit following the Oilers when they fired Bum. Indeed, the Saints briefly became my secondary team, as Phillips took Campbell and Ken Stabler to New Orleans with him.

Phillips briefly came back on my radar screen when the Cowboys inexplicably hired his son, Wade, to be head coach. Bum was there at the opening press conference and at various points during Wade’s ill-fated tenure.

The elder Phillips was a character and remained beloved in Texas to the end. May he rest in peace.