Howard Fineman paints a picture of a White House in full campaign mode. Trying not to follow in his father’s footsteps by losing an election after winning a war,

Bush knows he has to talk about Ã¢€œjobs, jobs, jobs.Ã¢€ In the latest polls, voters put economic concerns ahead of terrorism-related ones. Still, the president ultimately seems destined to go to the country next year with a message of Ã¢€œwar, war, war.Ã¢€ And why not? His lofty job-approval rating (72 percent in the latest NEWSWEEK Poll) is buoyed by his genuine popularity as commander in chief. DemocratsÃ¢€”united and cuttingly effective about the shortcomings of the economyÃ¢€”are divided, confused and toothless on security issues. A basic electoral rule: play to your strength.
The strategy is risky. Bush has laid out an ambitiousÃ¢€”almost limitlessÃ¢€”goal: to eradicate terrorism by changing hearts and regimes throughout the Axis of Evil and all of its annexes. But the reclamation projects are just beginning, and could blow up. Depending on its provenance, another terrorist attack could raise questions about his security priorities. In Iraq or Afghanistan, sectarian and ethnic violence could trap Americans in a deadly cross-fire. ItÃ¢€™s an unsettling predicament for a man who craves regular order: heÃ¢€™s depending on the kindness of strangers and the actions of foreign enemies. But he has to hope that his international vision succeeds, for heÃ¢€™s staked his presidency on it.

I think 2004 will be a lot different than 1992. Foreign policy will be much more important. And, fortunately for this Bush, there appears to be no Ross Perot or Bill Clinton this time. None of the current Democratic candidates appear loaded with personality. Bush 43 is much more popular with the GOP base than was Bush 41, so unless something drastic happens, there will be no Pat Buchanan to beat him up in the primaries and cause him to spend campaign money to defend himself. So, he’ll be able to be in full General Election mode from the beginning. Likewise, if there is a major third party candidate that will take a lot of votes from Bush, I don’t know who it would be at this point. 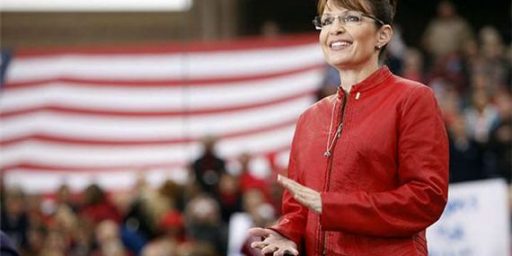 Diagnosing The Odd Relationship Between Sarah Palin And The Media