The Risky Business Edition OTB Caption ContestTM is now over.

The Risky Business Edition OTB Caption ContestTM is now over. 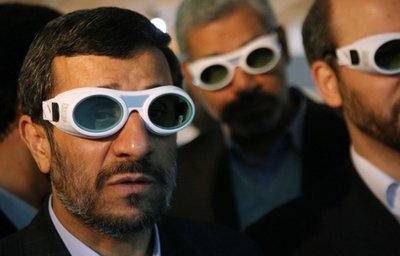 First: JazzShaw – “I can see Israel from my house.”

Second: Debbie Mabey – “Oh no! I have to leave the theater immediately — I think I left the thermonuclear reactor on back home.”

Third: charles austin – “I thought you said I could see through burkas with these?”

ptfromou – “The Future’s So Bright, I gotta wear shades”

Maggie Mama – Ahmadinejad waits in line for his swim flippers.

G.A.Phillips – Part of the new line of homicide bomber safety wear. They reduce the brightness of the flash and protect your eyes from the flying debris.

“I must have the Illudium Pu-38 explosive space modulator.”

Religious leaders waiting for Islam domination,
Nuke program in gear — buys a lot of of fear
Attack plans are in place, targetting is getting better

Terrorizing all right,
Uranium is Weapon’s grade
The blast’ll be so bright,
We’ll hafta wear shades

Well Allah be blessed and world be wise,
‘need a Kim Jong-Il techie, and X-ray guys,
Attacking Israel is great, but Tel Aviv is better.

The Monday Contest has already opened all the presents.