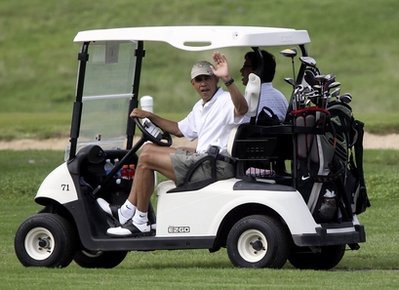 First: GaltsGirl – No, No.. no time for a presser. Michelle is waiting back at the clubhouse!

Second: Mr. Prosser – You press guys are so ungrateful, would you rather be here or up watching a grisly mama shoot a moose?

Third: charles austin – “Hey everybody, we’re all going to get f*&%ed!”

JazzShaw – “Ha! Let’s see YOU schmucks get a tee time here on one day’s notice!”

I didn’t know that Kenya had a ProAm.

I wasn’t bowing, I was just practicing keeping my head down.

The Monday Contest is keeping things on ice.