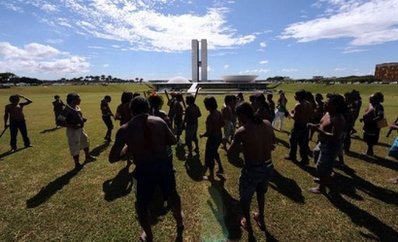 Second: Maggie Mama – “The American President has given us this 10 billion dollar solar power plant to provide our tribe with electricity.” “But, chief, what’s electricity?”

Third: Mr. Prosser – I don’t know, guys. I think the party central committee gave us the wrong directions to CPAC.

MstrB – I don’t know what it is, but Paris Hilton will make a sex tape with it.

Mr. Prosser – Due to the recession, the Carnivale celebrations were much scaled back from previous years.

“What we need is a really good community organizer.”

The Monday Contest can hear a regime drop.