The Ghost In The Machine Edition OTB Caption ContestTM is now over. 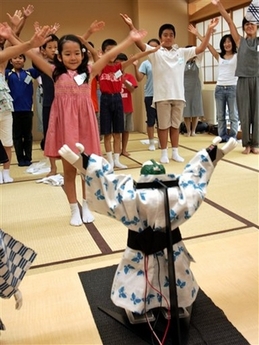 Second: FormerHostage – I like big bots and I cannot lie…

Third(tie): Gaijin Biker – Sony’s new “Simon Says” robot was quickly pulled off the market after it ordered the schoolchildren seen here to turn their heads a full 360 degrees.

Third(tie): yetanotherjohn – The French suffered further humiliation when it was revealed that the Japanese company has perfected a robot that can perform all the functions of the French soldier.

Mythilt – “I for one greet our new robot overlords.”

Suzanne Berton – Even President Bush doesn’t have this many followers.

charles austin – The younger generation has abandoned the subtle mystery of the green tea ceremony.

New Rules of Robotics
1. The Robot is Always Right
2. IF the Robot is Wrong, see Rule 1.

“Next one calls me ‘chip’ is getting clobbered.”

“There are only 10 ways of doing things around here, my way or the highway.”

Q: How do robots count the number of Octopus vulgaris Mollusca?
A: Oc Tally.