The It Feels So Good When I Stop Edition OTB Caption ContestTM is now over. 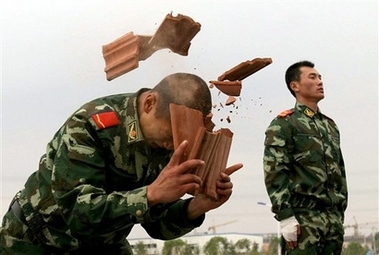 Anderson – China’s peacekeeping force for Lebanon prepared for “hitting its head against a brick wall,” misled by the most common metaphor for Mideast regional diplomacy.

yetanotherjohn – Capitalism can take strange turns in China, where they were filming commercials for the Chinese introduction of V-8.

Harry – The attempt to shore up the Chinese brick-making industry by giving them the army hat contract was doomed from the beginning.

“I want to be welcomed in America, they say ‘…give me your poor, your tired…'”

Well at least PETA has less problems with this than the Animal Olympics.

What is the sound of one brick whacking. (The new Zen left something to be desired)

Thursday contest is already a winnerwiener.

Riding Sun has regurgitated the penguin.
Sgt Hook is carrying the load.
Clash of Civilizations is hoping for a landslide this election year.