The Captain kramerica Edition OTB Caption ContestTM is now over. 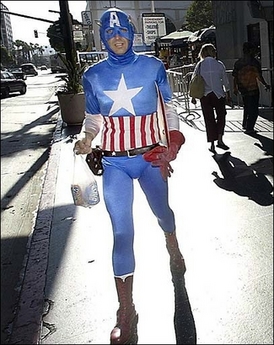 First: yetanotherjohn (Time Magazine 2006 Person of the Year) – Some say that the Libby conviction has gone to special prosecutor Fitzgerald’s head.

Third: Gollum – It was no real surprise that his boots were “Dickies.”

McGehee – “Will perform acts of heroism for food.”

The Fill in The Blank Award

(I was originally thinking ‘Ann Coulter’ for the blank, but given ‘Hillary Rodham Clintons’ recent invocation of the name JFK I might change my mind — rodney dill)

I just knew Rumsfeld would be back.

AP BREAKING: There have been reports of a casualty from another Dick Cheney hunting trip

Suddenly Britney Spears rehab takes a turn for the worse.

Ann Coulter Falls Out Of Love With Trump Over DACA